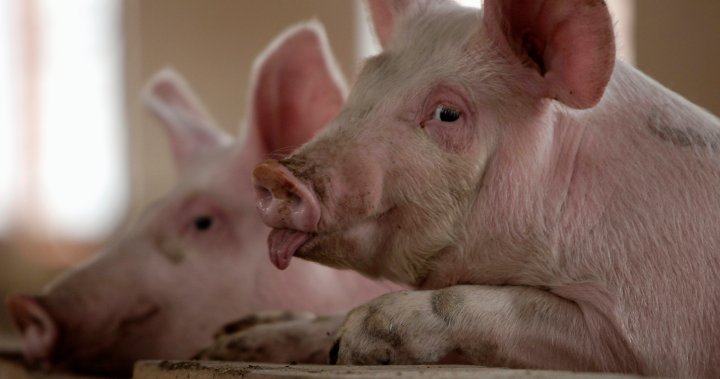 While 70 per cent of Alberta pork products are exported internationally under federal requirements, Alberta Pork executive director Darcy Fitzgerald says the red table involved when moving between provinces can cause some headaches.

“The issue that many people have brought up in the past is that (they) can’t move product from a provincial plant in one province to another,” Fitzgerald said

The report’s author, Jared Carlberg, says barriers like differing transport and meat-processing regulations between provinces is making it difficult to trade, costing producers money and driving up prices for consumers.

“What we’re doing, in some ways, is putting the brakes on what we might refer to as the free or unfettered flow of goods and services across provinces,” Carlberg said.

“All of these things add up to lost economic opportunities.

“I think everyone, if we gave them the benefit of the doubt, would say they’re doing their part to keep people safe… but there needs to be greater harmonization.”

“It would be nice to see big picture work happening among greater numbers of provinces with respect to those interprovincial trade agreements, which have been shown to be successful in helping make things move a bit better,” Carlberg said.

The NWPTA came into effect in 2010 and has been fully implemented since 2013.

Read more:
High cost of hay in Alberta could drive up beef prices, put livestock producers out of business

He says improved facilities could help people who are looking to shop local and, in turn, help producers.

“Anytime you can develop that stronger connection, between the people that are enjoying the product and the producers raising it, we consider that beneficial,” Laycraft said.

“We just want to see a good, fair system where we’re not unduly restricting the flow of goods and services among provinces because we do see there is a real, tangible economic cost to that,” Carlberg said.