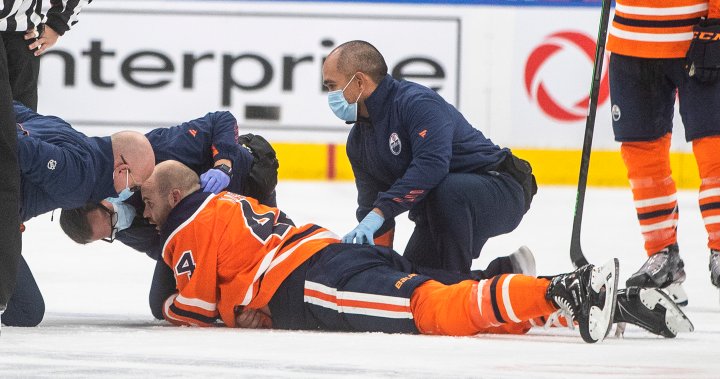 The Edmonton Oilers 3-2 win over the Vancouver Canucks Thursday night at Rogers Place was overshadowed by a scary moment late in the third period.

Zack Kassian’s bare head hit the ice at the end of a fight with Vancouver’s Zack MacEwen with 3:56 left in the third period. Kassian’s helmet had popped off during the bout. The pair tumbled to the ice with MacEwen landing on top of Kassian. MacEwen immediately signaled to the Oilers bench that Kassian needed help. After being on the ice for a couple of minutes, Kassian got to his feet and was helped to the Oilers dressing room.

“He’s got a pretty good bump on his head from hitting the ice, but he was in good spirits,” Oilers head coach Dave Tippett said post-game.

“It’s one of those ones that upsets you. It’s a freak thing. His helmet falls off and he falls the wrong way.”

“To see him like that on the ice, it makes me sick to my stomach,” Derek Ryan said.

The Oilers power play boosted them to a 2-0 lead after the first period. Leon Draisaitl whapped home a one-timer off a pass from Connor McDavid. Later, McDavid blazed in on the right wing and flipped a short side shot past Jaroslav Halak.

The Canucks replied with two power play goals in the first six minutes of the second. Quinn Hughes pounded a point shot past Mike Smith, then Nic Petan scored on a tip in front. Ryan restored the Oilers lead by deflecting a Duncan Keith shot through Halak.

“Obviously getting that goal was huge for the confidence but we felt useful in all situations,” Ryan said of his line with Warren Foegele and Kassian.

“When you’ve got a couple big guys like (Kassian and Foegele) that you want forechecking really hard, he reads off those guys well.”

With Halak on the bench for an extra attacker late in the third, Smith lobbed a shot at the Canucks goal. The puck went about five feet wide.

“I like to play a draw, but I would say that was more of a straight pull,” Smith joked. “The ‘tee box’ was kind of set up to the right a little bit and made me shoot it down the right side.”

Smith made 36 saves, including 16 in the third period.

The Oilers close out the pre-season Saturday night in Vancouver.

With files from 630 CHED’s Brenden Escott