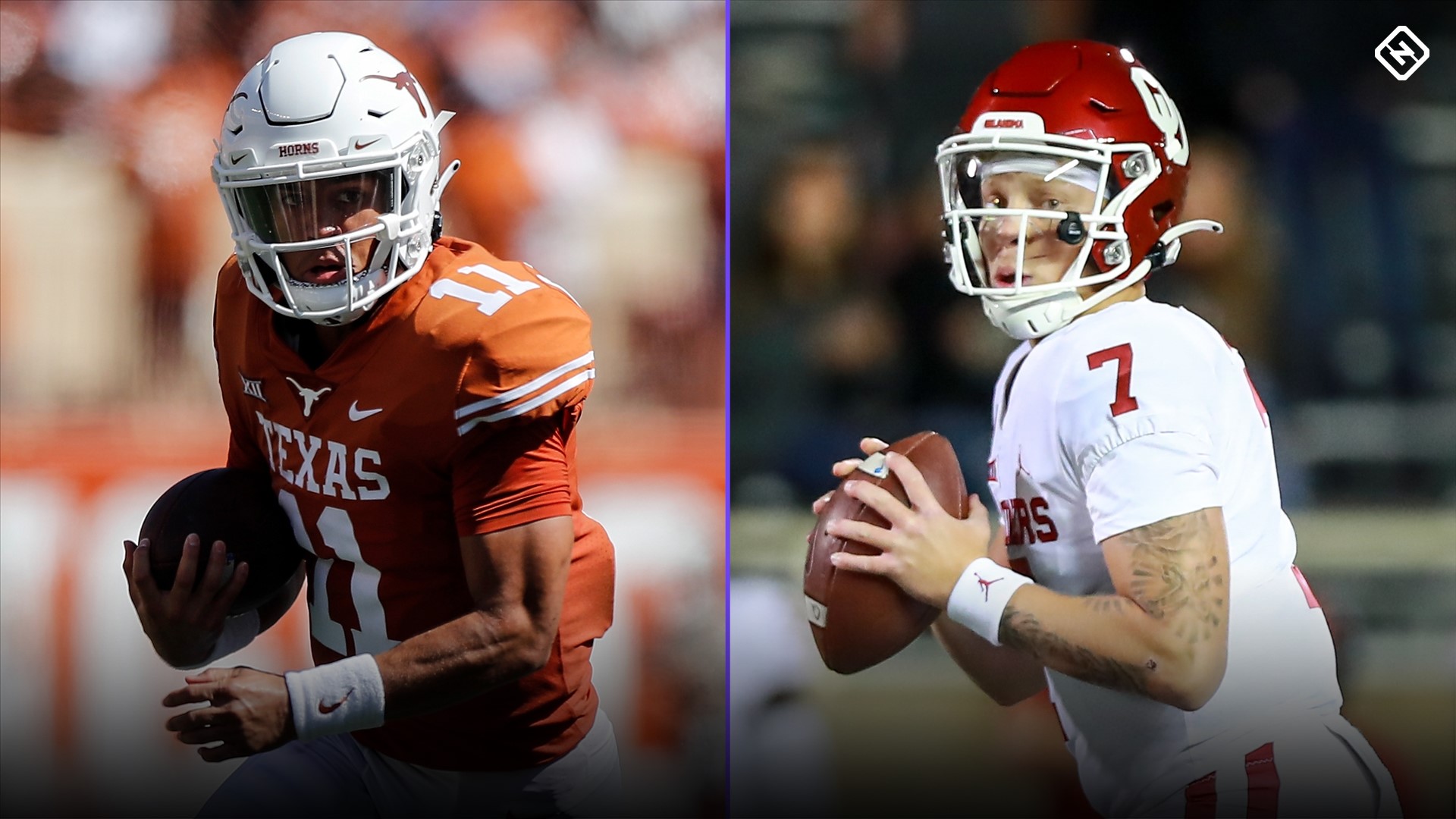 In a week full of incredible matchups, none can capture the attention of college football fans quite like the Red River Showdown between No. 21 Texas and No. 6 Oklahoma.

This game has as many storylines as the State Fair of Texas has food vendors. Not least of those is that the loser of Saturday’s game could be on the outside looking in at the College Football Playoff. Texas (4-1) would have its second loss of the season, a seemingly insurmountable obstacle for several otherwise-qualified teams to overcome through the playoff era. The same could be said of Oklahoma which, despite its perfect 5-0 record, has not looked like a top-five team all season.

It also marks the first time first-year Texas coach Steve Sarkisian will take on Oklahoma. If he manages a Red River win in his year there, he would become the first coach to achieve the feat for the Longhorns since Mack Brown led Texas to a 34-3 win over the Sooners in 1998. (Lincoln Riley did the same in his 2017 debut, beating first-year coach Tom Herman). Sarkisian’s team has looked far from unbeatable, but neither has Oklahoma. And crazy things tend to happen in rivalry games.

Also, expect plenty of talk about these teams’ defection from the Big 12 to the SEC. They are officially tabbed to join their new conference in 2025, but it’s possible their emigration could be expedited as soon as the 2022 season. Could this be the last Big 12-themed Red River Showdown in history?

Sporting News is tracking scoring updates and highlights between No. 6 Oklahoma and No. 21 Texas. Follow along live for all you need to know on the Red River Showdown:

2:41 p.m.: Texas is called for holding, setting up second-and-10 back at the 31. Oklahoma also gets a sideline warning.

2:35 p.m.: Williams looks to be sacked, but manages to throw the ball; it’s tipped in the air but somehow caught by Stogner for a 2-yard gain. Here comes Brkic again.

2:31 p.m.: Texas has the play perfectly bottled up inside the box, but Thompson kept it for just enough for a first down. The Sooners are driving at the 31 with a new set of downs.

2:28 p.m.: Oklahoma takes over at the Texas 42 to start. This is a must-score drive for Oklahoma. Brooks goes for 9 yards on the first play down to the Texas 33.

2:24 p.m.: False start makes it third-and-15 from the 3. Thompson throws the ball out of bounds, bringing up fourth down.

2:21 p.m.: Williams makes a great throw to Woods, but the receiver can’t control the ball. The punt unit comes out, and Texas will take over at its 7.

1:53 p.m.: Sarkisian being surprisingly lax with time management. He finally takes a timeout with 14 seconds left on third-and-9 from the Oklahoma 31.

1:52 p.m.: Thompson overthrew Worthy on what would have been another huge gain. That brings up second-and-10 with 37 seconds left.

1:50 p.m.: Thompson is going to be called for intentional grounding; he never left the pocket. That makes it second-and-21.

1:50 p.m.: Worthy converts third-and-2 with another wide receiver sweep for 7 yards. Texas driving at its 40.

1:48 p.m.: Texas gets the ball back and would love nothing more than a score here. At the very least the Longhorns will want to keep Oklahoma from getting another shot at the end zone; the Sooners have the ball back to start the second half.

1:43 p.m.: D’Shawn Jamison breaks up a would-be touchdown pass to Jadon Haselwood in the end zone, bringing up fourth down.

1:41 p.m.: Brooks breaks a tackle at the line of scrimmage and gets the yardage needed to convert third-and-1. Another run gets Oklahoma down to the 18 on second-and-5.

1:38 p.m.: Williams, a true freshman, is back out there. Looks like Riley’s trying to shake things up.

1:33 p.m.: That’s a HUGE run by Robinson, who takes the ball off right tackle and cuts back across the field, breaking Sooners tackles the whole way down. He’s brought down at the 2-yard line.

1:31 p.m.: FUMBLE RECOVERY, TEXAS. A promising Oklahoma drive is stopped in its tracks after Alabama transfer linebacker Ben Davis knocks the ball loose from Rattler in the backfield. It’s recovered by, who else, Overshown. Texas takes over at its 44.

1:30 p.m.: Rattler has great protection and finds a wide-open Eric Gray on the sideline for a 14-yard gain to the Texas 44.

1:30 p.m.: More Brooks, and it nets Oklahoma a first down on the third-and-1 attempt. Sooners still driving at their 42.

1:25 p.m.: Texas keeps trying to set up slow-developing plays and Oklahoma keeps teeing off on Thompson. They blitz on two consecutive plays to bring up fourth down. Texas will punt from near midfield.

1:24 p.m.: Thompson hits Whittington on the slant for a 16-yard game. Seemingly no issue with his throwing hand.

1:19 p.m.: FIELD GOAL, OKLAHOMA. Gabe Brkic’s 39-yard attempt sneaks in through the right upright to make it 28-17 Texas with 12 minutes in the second. Sooners are chipping away.

1:19 p.m.: Rattler’s pass is tipped and nearly picked off by Foster. He had Mims early but didn’t pull the trigger. That brings out the field goal unit.

1:17 p.m.: Oklahoma resorting to some trickery to open this drive; a double-backward leaves Jeremiah Hall wide open down the sideline for a 48-yard gain. Oklahoma’s moving now at the Texas 32.

1:17 p.m.: Uh-oh. Thompson’s holding his thumb after hitting his hand. Backup Hudson Card has his helmet on the sidelines.

1:13 p.m.: Pressure from Nik Bonitto is too much, too fast to set up the pass to Robinson. Texas punts, giving Oklahoma the ball at its 26.

1:07 p.m.: TOUCHDOWN, OKLAHOMA. Situational quarterback Caleb Williams bursts through the line and there’s no one left to stop him from taking it the distance. He broke a tackle behind the line of scrimmage and takes it 66 yards for the score. It’s 28-14 Texas with 14:45 left in the second quarter.

1:02 p.m.: Eric Gray gets roughly 9 yards but is spotted just short of the line to gain. That’ll do it for the first quarter, giving Riley plenty of time to think about whether he wants to go for this.

12:59 p.m.: Back to the grind for Rattler and Co. Oklahoma desperately needs a score here.

12:56 p.m.: TOUCHDOWN, TEXAS. Thompson connects with Moore once again, this time for 48 yards and a score. It’s 28-7 Texas with 1:02 left in the first quarter and we are now in blowout territory.

12:55 p.m.: Texas gets a first down on third-and-1 with a sweep from receiver Jordan Whittington, who takes it 8 yards.

12:52 p.m.: Texas is flying to the ball and making life very uncomfortable for Rattler. Alfred Collins works off the edge and gets a coverage sack on Rattler to make it third-and-20. The Sooners will punt from their 15.

12:46 p.m.: TOUCHDOWN, TEXAS. Thompson has his second touchdown pass of the day, a 10-yard touchdown to a wide-open Joshua Moore. That makes it 21-7 Texas with 4:39 left in the first quarter.

12:44 p.m.: Thompson looks for the long ball but settles for an intermediate gain from Xavier Worthy with pressure in his face. That’s a 26-yard gain down to the Oklahoam 25.

12:43 p.m.: INTERCEPTION, TEXAS. Rattler throws it straight to B.J. Foster; must have been miscommunication between Rattler, who is clearly frustrated, and tight end Austin Stogner. The Longhorns take over at their 49.

12:40 p.m.: A lot of stuff happening on that punt return. Texas’ Josh Thompson ran over Oklahoma’s Drake Stoops, knocking him into Mims, the returner. The ball hit Thompson’s shoulder at the 33, but it’s recovered by Texas at the 16. Since no Sooner touched the ball on the return, officials should spot the ball where it first touched Texas.

12:39 p.m.: Thompson dances in the backfield but is eventually brought down for a loss of 4 yards.

12:34 p.m.: TOUCHDOWN, OKLAHOMA. Rattler gets Oklahoma on the board with a 2-yard rush off the run-pass option. The defender elects to cover the receiver, allowing him to dive in for the score. It’s 14-7 Texas with 9:14 in the first quarter.

12:30 p.m.: It doesn’t matter. Brooks gets enough for the first down, and Oklahoma has first-and-goal from the 2. Though it does look as if the play is under review.

12:26 p.m.: Kennedy Brooks needs six Longhorns defenders to bring him down on the 16-yard run. Sooners are moving now at the Texas 30.

12:25 p.m.: Looks like the officials were only reviewing whether Woods caught the pass, not whether he stepped out of bounds. That results in a 29-yard completion on third-and-10, giving the Sooners first-and-10 at the Texas 46.

12:23 p.m.: Oklahoma finally gets a positive play down the sideline, but receiver Michael Woods III may have run out of bounds before catching the pass. The play is under review and if it’s overturned it’ll be a three-and-out.

12:12 p.m.: BLOCKED PUNT, TEXAS. Things go from bad to worse for Oklahoma after Michael Turk’s punt was blocked by Overshown. The Longhorns recover at the 3-yard line, setting them up for another huge touchdown early in the first.

12:10 p.m.: Oof, nothing doing for Oklahoma on its first drive — Spencer Rattler was sacked by Texas linebacker DeMarvion Overshown on third-and-7, bringing up fourth-and-16. Sooners will punt.

12:08 p.m.: TOUCHDOWN, TEXAS. Well, that took no time at all. Casey Thompson completed a short pass to Xavier Worthy, who did the rest for a 75-yard score. That makes it 7-0 Texas with 14:46 left in the first quarter.

Texas vs. Oklahoma will kick off at noon ET from the Cotton Bowl in Dallas.

How to watch Texas vs. Oklahoma

This Red River Showdown will air nationally on ABC.