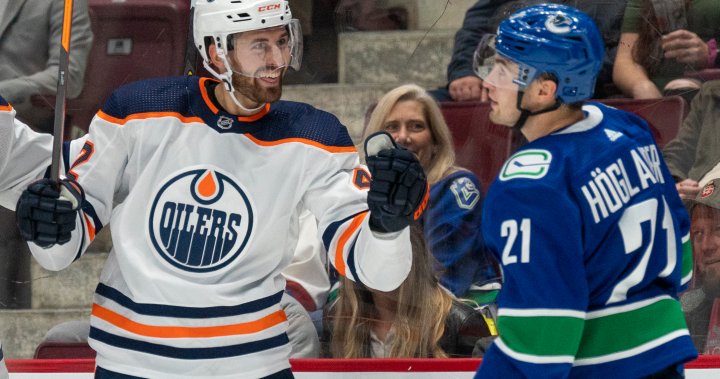 The Edmonton Oilers wrapped up their pre-season Saturday night with a 3-2 road win over the Vancouver Canucks. The Oilers went 6-1-1.

Evan Bouchard fired home a blast from the point to give the Oilers the lead on the power play with 3:40 left in the first period. Only 49 seconds later, Colton Sceviour set up Brendan Perlini for his sixth goal of the pre-season.

Mikko Koskinen stopped all 11 Canucks shots in the first period. Stuart Skinner took over between the pipes to start the second.

Kailer Yamamoto scored the only goal of the second period. He was sent in alone by Derek Ryan and beat Thatcher Demko for a shorthanded strike.

Phillip Di Giuseppe beat Skinner to put the Canucks on the board with just over six minutes left in the third. The Canucks pulled Demko with 3:37 left and pulled within a goal with 2:18 to go when J.T. Miller beat Skinner with a redirection.

With 1:12 on the clock, Bouchard went off for hooking.  Skinner came up with a right pad save just before time expired to preserve the win. He finished with 15 saves on 17 shots.

Connor McDavid, Leon Draisaitl, Darnell Nurse, Tyson Barrie, and Mike Smith sat out for the Oilers. Zack Kassian didn’t play after being hurt in a fight on Thursday. His status for Wednesday’s home opener is undetermined.

The Oilers open the regular season Wednesday at home against the Vancouver Canucks. Coverage on 630 CHED will start with the Face-off Show at 6 p.m. The game will start at 8 p.m.