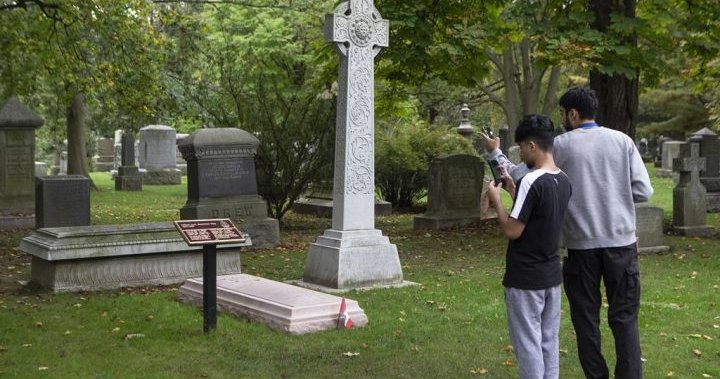 It was in late January that vandals so badly scratched out the face of Mackenzie King on an awareness panel by the former prime minister’s final resting place in Toronto that a federal agency decided the panel had to be replaced.

For more than two decades, the commemorative panel didn’t receive a revamp, just like others at prime ministerial gravesites overseen by federal officials.

Those officials, however, are rethinking what the panels should say and reflect how the country views its past, specifically in light of historical mistreatment of Indigenous Peoples.

Inevitably, experts say, that will cause tension about how to mark these sites.

The plaques are among a suite of issues that Parks Canada and the Historic Sites and Monuments Board of Canada have to deal with in the coming years at the 16 gravesites, the details of which are outlined in inspection reports released to The Canadian Press under the Access to Information Act.

The program first launched in 1999, hoping to prevent the final resting spots of prime ministers from becoming irreparably damaged.

All but one of the graves are in Canada – R.B. Bennett is buried at a church in Mickelham, U.K., a town of 600 people about a one-hour train ride southwest of London. His sarcophagus needs repairs to cracks and breaks, not to mention a good cleaning of moss.

2:05
CPS commemorate officers that left the force and fought in 1st and 2nd world wars

CPS commemorate officers that left the force and fought in 1st and 2nd world wars – Nov 10, 2020

Over its more than 20 years of existence, the program has spent about $1 million on inspections, repairs, commemorative plaques and flagpoles at gravesites. Annual spending is based on yearly needs, and Parks Canada said it anticipates average annual expenses to increase slightly over the next five years.

Some of that has to do with the addition last year of John Turner’s gravesite in Toronto. The documents say an awareness panel was supposed to be installed this fall; Parks Canada would only say that “planning continues” for a commemoration ceremony.

Read more:
75 days of healing gatherings at unmarked gravesites coming to a close in Enoch area

New panels are set to be installed at each remaining gravesite that would identify the former prime minister’s time in office, and the reasons that they, and the graves, carry national historic significance.

Cecilia Morgan, a social and cultural historian from the University of Toronto, said the usual tension that surrounds commemorations can be exacerbated when the focus is on a historical figure who has taken on a larger symbolism in the public’s mind, and whose actions or achievements are thrown under a more critical light.

“What I see often is the kind of deep emotional attachment that people have, to their sense of the past and to the symbols that we create of that past that is often solidified in those particular individuals or organizations.”

Parks Canada in an email said wording on the revamped plaques would “recognize the enormous shifts in historical understanding” and “reflect on the past in the context of the present.”

Cynthia Wesley-Esquimaux, chair of the National Centre for Truth and Reconciliation in Winnipeg, said a diverse panel should debate wording on the plaques to mark a prime minister’s contributions to the country’s history, both positive and negative.

She pointed to Sir John A. Macdonald as an example: He made a contribution as the country’s first prime minister, but was also an author of the government-funded, church-run residential school system where Indigenous children were torn from their families and subjected to widespread sexual, emotional and physical abuse.

Any wording, she said, should make everyone a guardian and witness to these realities and work to ensure the negatives never happen again.

“It will not be easy. It will be very uncomfortable,” said Wesley-Esquimaux, who is also Chair for Truth and Reconciliation at Lakehead University.

“But I think you cannot get to reconciliation, or better relations, without having that conversation and without acknowledging the kinds of things that have happened because people made decisions that had a very tragic impact.”

Aside from the plaques, the gravesite inspection reports also flag issues with rust from metal ties seeping through stones at multiple graves, and writing on markers disappearing at others because of the elements and years of problematic maintenance.

1:57
How to move forward with the TRC’s calls to action

The biggest work order appears at the final resting place of Pierre Trudeau.

The grey stone, concrete and brick mausoleum has taken a beating from increasing freeze-thaw cycles during winter months, as well as stronger and heavier rainfalls becoming more frequent, which federal inspectors chalked up to climate change.

The sheet metal roof and flashing are well past their lifespan and can’t stop water from seeping in, requiring a complete replacement. Parts of the outer wall need to be carefully dismantled to repair water damage, including one load-bearing wall at the crypt of the former prime minister.

The 2020 inspection report calls for work to start no later than this fall. Parks Canada said it is developing a work plan that includes “detailed investigations (that) are ongoing with planning and design work to follow.”

Parks Canada said more severe weather related to climate change has had an impact on gravestones, sarcophagi and mausoleums it oversees. The agency added that it has increased the frequency of inspections hoping to better “recognize and mitigate damage or deterioration caused by climate change and a variety of other factors.”