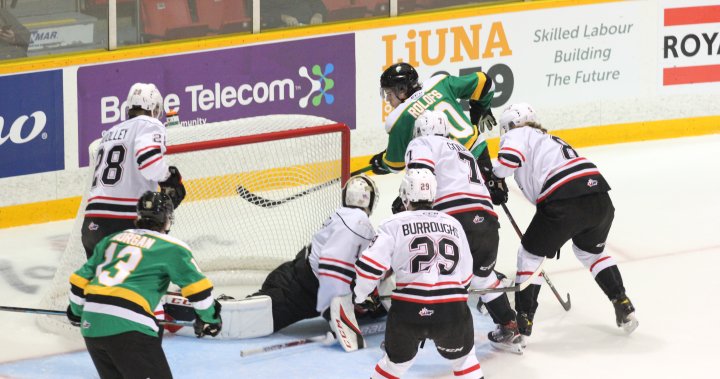 Abakar Kazbekov broke a 3-3 tie with less than five minutes remaining in the third period as the London Knights defeated the Attack 4-3 in Owen Sound on Saturday night.

After a loss in London less than 24 hours earlier, the Attack came out flying and struck 28 seconds into the game on a shot by Ethan Burroughs that knuckled under Brett Brochu.

Luke Evangelista stopped the Owen Sound wave with a goal at 3:53 of period one. Knights defenceman Jackson Edward got the puck to the Attack net and Evangelista found a way to knock it behind big Mack Guzda to make it 1-1.

After not leading at all in the first game between the teams, London went ahead on a monumental moment for Stuart Rolofs as he scored his first Ontario Hockey League goal. Sean McGurn’s shot was stopped, but Rolofs went to work at the side of the net for the ultimate Thanksgiving weekend goal as Rolofs kept stuffing until the puck crossed the goal line.

A power play goal by Denis Goure at 1:58 of the second period tied the game for a second time before Evangelista’s second restored the London lead at 3-2.

Once again the Attack fought back as Logan LeSage found Thomas Chafe for his first OHL goal with less than seven minutes remaining in the second period to send things to the final period tied 3-3.

The teams went back and forth in the final period until Connor Federkow sent a pass to Kazbekov on the right side of the ice and he used a quick release to beat Guzda for the game-winner.

Brett Brochu has now won 24 of his past 25 starts.

2:05
The Kingston Frontenacs are pre-season favourites to win the OHL

The Kingston Frontenacs are pre-season favourites to win the OHL

Following the October 8 announcement from the Ontario government regarding capacity limits inside certain venues, the Ontario Hockey League has decided to allow full capacity for all of its Ontario-based facilities.

Knights season ticket holders will receive information from the team on Wednesday.

Jon Sim wore some pretty big shoes when he played in the Ontario Hockey League in the mid-90s.

London forward Landon Sim took just a period and a bit to score his first OHL goal and now sits just 310 points back of his father with a career in front of him. Sim grew up in Nova Scotia and was a third-round pick of the Knights in 2020.  Knights general manager Mark Hunter coached Jon in Sarnia.

There is nothing like meeting up with old friends at Thanksgiving. The Knights will spend Thanksgiving Monday with their old rivals, the Windsor Spitfires. The game in Windsor will be the first of eight matchups between the teams this year. The Spitfires are 1-1 so far on the season after losing 6-3 at home to Sarnia on October 7 and knocking off the Sting 3-2 in overtime on October 8.