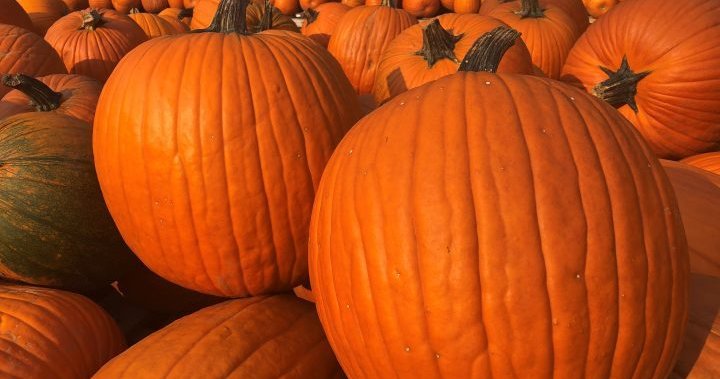 With fall under way and Halloween up ahead, pumpkin season is in full swing in Canada.

For farmers across the country who start planting end of May, it’s an important time of the year. Harvest typically starts around Labour Day weekend in mid-September.

Read more:
COVID-19: Ontario says kids can trick or treat this Halloween, with some precautions

This year, extreme weather events have complicated pumpkin production for some, but no shortages have been reported so far.

“We had everything — too hot, too dry, too wet, all within the same month, each month,” said Kevin Howe, a farmer in Aylmer, Ont.

Howe, whose family grows 240 acres of pumpkins each year and supplies to Loblaws, said they were fortunate that the heavy rain did not wipe out their crop, but several other farms in the area that are on a heavier soil had a “significant loss”.

Packing the pumpkins for wholesale has also been a concern amid a shortage in cardboard pallets and bins, said Howe.

“It’s definitely a challenging year for all,” he said of the situation in southern Ontario.

The weather, shipping related issues and insufficient labour have already caused a supply crunch in parts of the United States, raising the prices ahead of Halloween.

However, farmers and provincial agricultural ministries are not anticipating that would be the case in Canada.

The majority of Canada’s pumpkins are grown in Ontario and Quebec.

Pumpkins usually thrive in hot and even conditions, with lots of sunlight and enough moisture of about an inch of rain per week.

This year, summer conditions in southern Ontario have been wetter than average, causing water mold.

That, coupled with labour shortages have affected the province’s pumpkin crop, according to Loblaw, Canada’s largest food distributor.

“We are doing everything we can to ensure that we get good quality product to our customers this fall. At this point, we still have supply,” a Loblaw spokesperson told Global News in an emailed response.

Last year, Ontario’s combined marketed production of pumpkin and squash was 98,037 tonnes, according to data from the Ontario’s Ministry of Agriculture, Food & Rural Affairs (OMRFA).

The ministry said it was too early to predict the impact this year’s weather will have on yield and availability, “as most growers continue to harvest their crops over the next few weeks”, a spokesperson told Global News.

Kelsey Banks, a 28-year-old farmer and agronomist in eastern Ontario, said the wet periods led to some of her crop getting affected with disease, while the drought in August caused the pumpkins to become misshapen. But overall, she is satisfied with the yield on her family’s farm near Kemptville, Ont., and is not expecting a shortage.

“I would say it’s one of the best years we’ve had in terms of the quantity of pumpkins and squash and the quality,” said Byron Good, a hobby farmer and agriculture research technician at the University of Guelph.

Meanwhile, in British Columbia, the pumpkin crop is early this year, according to the B.C. Ministry of Agriculture, Food and Fisheries.

“The field storage conditions are very wet due to the high amount of rainfall that has been experienced in September and into October in the Fraser Valley,” a ministry spokesperson told Global in an emailed statement.

Last year, the province produced 8,558 tonnes. The ministry is anticipating an average season of pumpkin production in B.C. this time around.

For the past 20 years, Shari Tompe has been growing pumpkins with her husband on their family farm in lower Fraser Valley in Surrey, B.C.

The water irrigation system on their 27-acre property combined with the heat wave and a new system of weeding made for an “excellent crop”, she said.

“This year is probably the best crop we’ve had in the last 21 years,” Tompe told Global News.

Despite that, she fears they might run out fast because of an increase in demand, with consumers looking for large orders.

“Hopefully this year is great and we won’t get any early rot because that’s always a consideration too, depending on what our weather is like and hopefully the pumpkins will be able to withstand until October or later.”