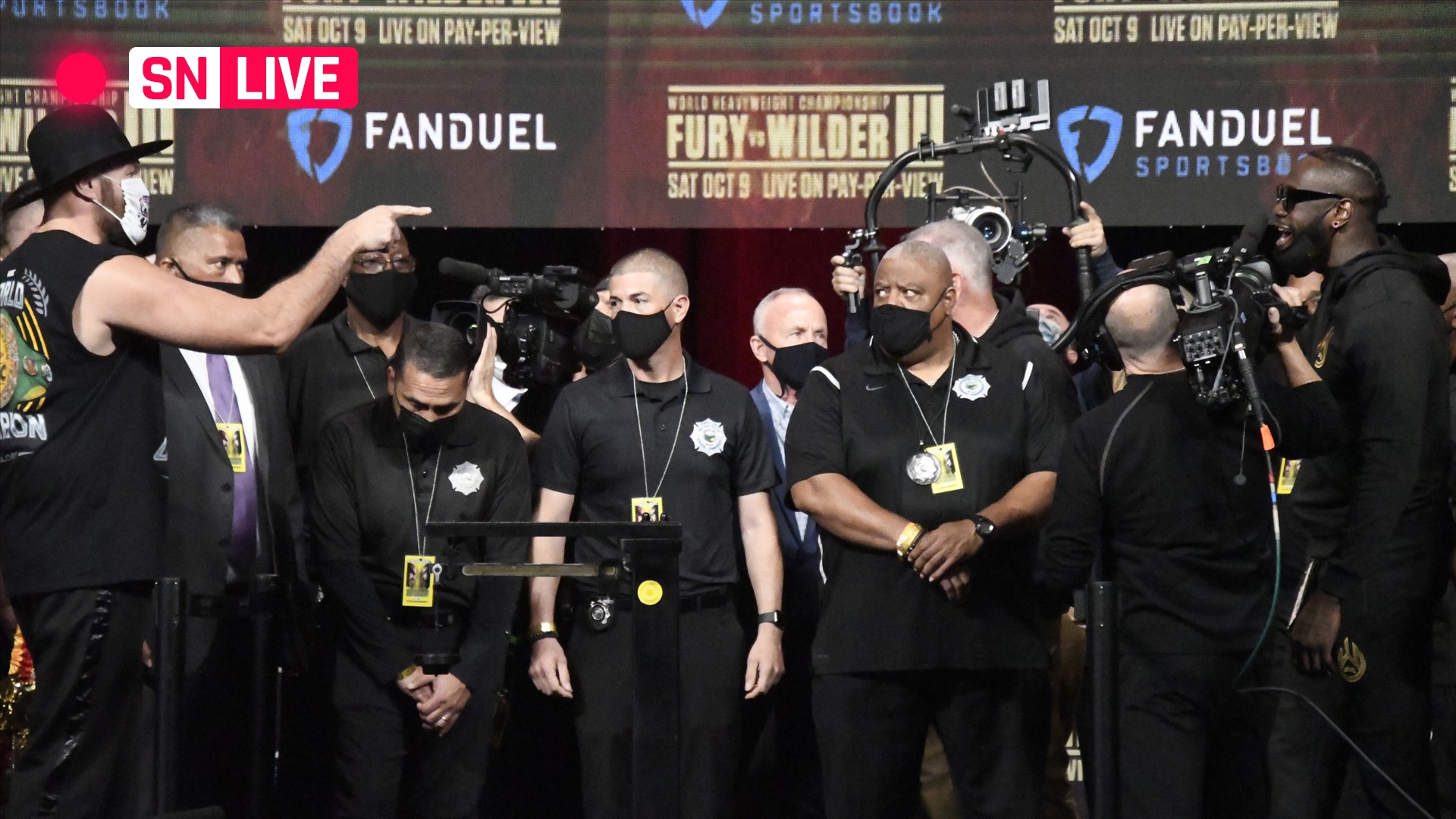 Tyson Fury and Deontay Wilder will look to settle things once and for all when they end their intense trilogy Saturday night at T-Moblie Arena. Fury’s WBC heavyweight championship will be on the line.

MORE: Fury-Wilder 3: A timeline to the trilogy

After battling to a split draw in their first meeting in 2018 — which featured one of the most iconic survivals of a knockdown in boxing history — Fury dominated Wilder and stopped him in the seventh round in their 2020 rematch.

The trilogy was originally set for later that year but the COVID-19 pandemic derailed those plans.

After more than a year of mudslinging, accusations and arbitration, Fury and Wilder will meet one last time. The winner will have a chance to make history and chase the dream of becoming the division’s first undisputed champion in over two decades, while the loser will be history.

Sporting News is tracking live fight updates and round-by-round highlights from Tyson Fury vs. Deontay Wilder 3 and the entire undercard. Follow for complete results from the 2021 heavyweight boxing trilogy fight.

Frank Sanchez gets decision Efe Ajagaba in a snoozer

10:54 p.m.: And down goes Ajagba to one knee after a right hand and Sanchez lights him up while he’s down in the eighth. Oh man, that’s bad. Ajagba gets up but this could have ended in a DQ if Ajagba didn’t get up.

10:51 p.m.: If you’re wondering why there haven’t been any updates in what is supposed to be an exciting heavyweight fight, it’s because there has been no excitement through seven rounds. Not a single ounce of excitement. It’s not fun. At all. The punch stats are even so it’s very difficult to tell who the judges see winning.

10:36 p.m.: Well, if you were looking for excitement, this fight has yet to deliver through two rounds. Both seem to want to ramp up the activity. And just like that, Sanchez slams a right hand into the face of Ajagba. But Ajagba took it well and is coming forward. Three rounds down and it’s heating up.

10:25 p.m.: The co-main event is up now with Frank Sanchez facing the hard-hitting Efe Ajagba. Again, expect someone to get knocked out.

10:09 p.m.: Well, that’s all she wrote. Kownacki continued to hit Helenius low and the referee stepped in to disqualify him. Or, at least that’s what it looked like. After a low blow, the referee pulled him aside and stopped the fight. It’s ruled a TKO at the 2:38 mark. I guess? Very strange ending.

10:04 p.m.: This is terribly one-sided. Kownacki ate a brutal amount of punishment and offered little to return in the sixth round. His corner might have to make a decision sooner than later to save their fighter from absorbing more damage.

9:55 p.m.: It’s not looking good for Kownacki after three rounds. He’s getting hit whenever he rolls forward and has yet to land anything of significance while his eye is swelling in a hurry. Kownacki gets nailed with a hard two-punch combination and stumbles back late in the third. He responds by hitting Helenius directly in the low-hanging fruit. Maybe that’s his only chance.

9:45 p.m.: Helenius cracks Kownacki hard with a combination to open the fight. I don’t know if Kownacki thought he had a bad night before but he better get on his game. Helenius just rocked Kownacki with a hard right hand. He’s beating him up in the first round. Yikes.

9:40 p.m.: Up next is Robert Helenius vs. Adam Kownacki. Kownacki was knocked out in the fourth round last March in a massive upset. Kownacki is seeking revenge but Hellenius isn’t here for it.

9:30 p.m.: Well, that didn’t take long. After a feeling out round, Anderson put his foot on the gas and pounced on Tereshkin. A barrage of punches left Tereshkin defenseless and the stoppage came at 2:51. That’s how you do what you’re supposed to do.

9:10 p.m.: We’re kicking off the PPV with Jared Anderson vs. Vlad Tereshkin. Anderson is 9-0 with 9 knockouts and many see him as a future champion. Will he prove that he’s on his way with his performance tonight? He’s a 12-1 favorite. Expect a knockout.

8:58 p.m.: This fight goes the distance. Berlanga should get the win but there’s going to be a lesson learned moving forward and his team better plug the holes in his game before a better fighter gets to him.

8:52 p.m: Coceres just knocked Berlanga down with a short right hand to the temple! Whoa. Berlanga’s up and Coceres jumps on him. Berlanga is saved by the bell. Uh oh. One round left.

8:49 p.m.: So if you’re trying to figure out what this means for Berlanga and his power, Coceres was knocked out by Billy Joe Saunders in 2019. Saunders was never known as a big puncher. Berlanga needs to set up his power better. He still has the ninth and tenth round to finish Coceres but he hasn’t had him in any serious trouble yet.

8:39 p.m.: Coceres cracks Berlanga with a blistering two punch combination in the sixth round that briefly wobbles the undefeated fighter. This is happening because Berlanga is actively trying to get the knockout and leaving himself open to counters. He’s still winning this fight pretty handily but a better fighter will take full advantage of this if he’s not careful.

8:31 p.m.: The first-round knockout threat of Berlanga seems to have disappeared with the step up in competition but he’s still winning this fight with Coceres pretty handily through 4 rounds.

8:17 p.m.: We’re ringside for Fury-Wilder 3 and knockout artist Edgar Berlanga is looking to add another body to is growing graveyard of boxing corpses. Can Marcelo Esteban Coceres survive?

Tyson Fury vs. Deontay Wilder 3 will take place Saturday, Oct. 9. Coverage will begin with a preshow at 7 p.m. ET, followed by the undercard at 7:30 p.m. ET. The pay-per-view main card is set to begin at 9 p.m. ET. Expect Fury and Wilder to make their ring walks for the main event between 11 p.m. and midnight ET.

How to watch Fury vs. Wilder 3

The preshow and preliminary bouts are available on ESPN2 and Fox Sports 1. At 8 p.m. ET, the undercard will continue on ESPN and FS1.

The Fury vs. Wilder 3 main card is an ESPN+/Fox joint pay-per-view. It costs $79.99 and can be live streamed through the Fox Sports app and ESPN+.

Click here to learn about the different pricing and bundling options with the ESPN+ platform.