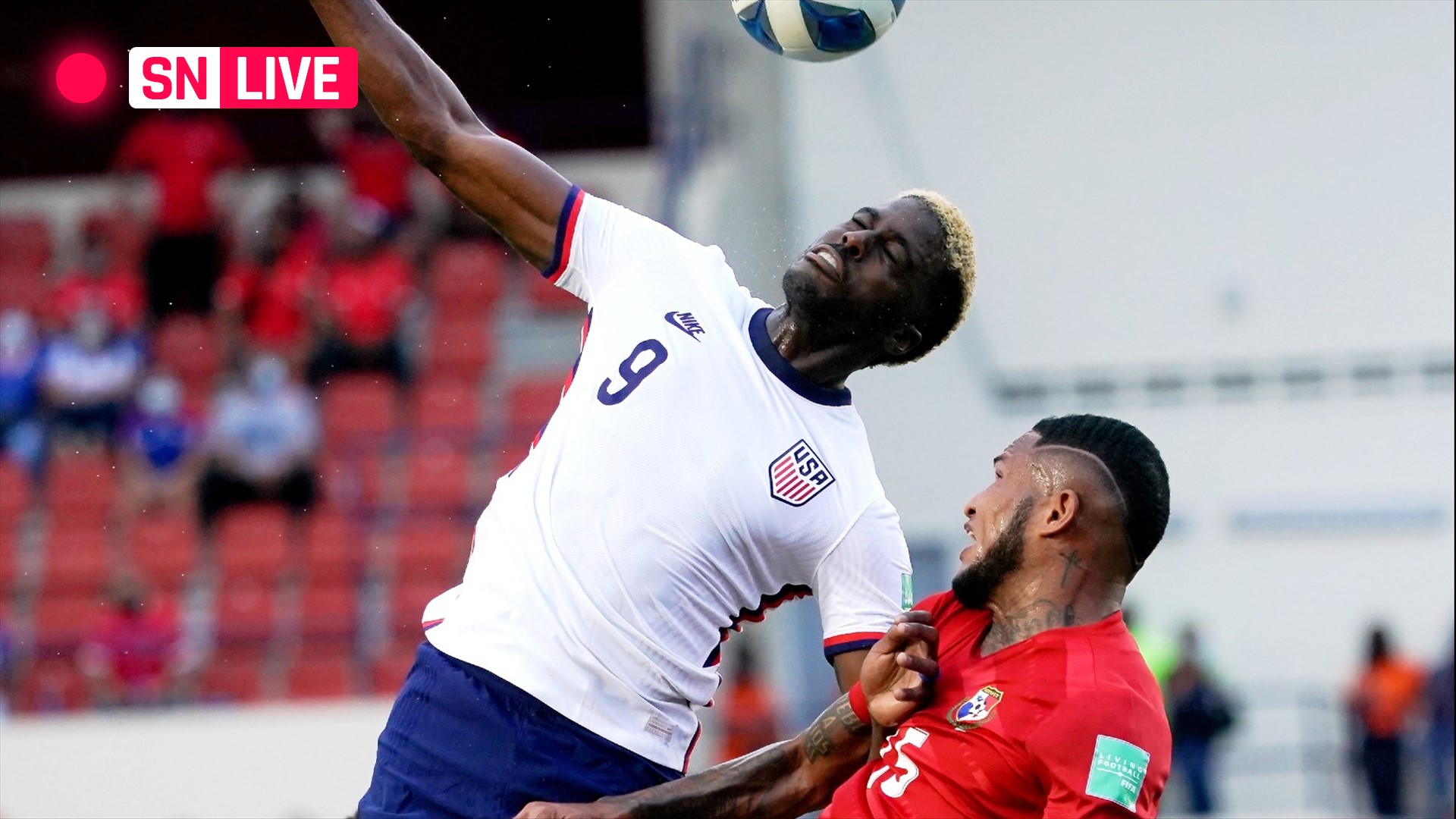 The U.S. men’s national team’s trip to Panama for Sunday’s World Cup qualifier will carry some extra significance for both sides on top of the three points on offer. That’s because the match falls on the anniversary of the USMNT’s elimination from the 2018 FIFA World Cup and Panama’s first-ever World Cup qualification, which came as a direct result.

USA’s 2-1 loss in Trinidad on Oct. 10, 2017, coupled with Panama’s last-gasp home win over Costa Rica (an 88th-minute winner by Roman Torres), permanently marked the soccer history of both nations in the previous World Cup cycle. For that reason there should be a celebratory atmosphere at the sold-out Estadio Rommel Fernandez as Panama seeks its first-ever win against the USA in a World Cup qualifier.

The Americans, ranked No. 13 in the world, are 6-0-2 all time in qualifiers against No. 68-ranked Panama and they head to Panama City riding a stream of two convincing qualifying wins that have coincided with the emergence of 18-year-old striker Ricardo Pepi. He started both those matches — victories over Honduras (4-1) and Jamaica (2-0) — and Pepi had a hand in all six goals, scoring three of them. Pepi came off with 20 minutes left against Jamaica and is likely to get the start again in Panama as U.S. men’s national team manager Gregg Berhalter rides the hot hand to first-place in the standings.

Panama is coming off a 1-0 loss in El Salvador on Thursday in a match played in difficult weather and field conditions. It was only the Canaleros’ first loss in this qualifying cycle (1-1-2, 5 points), but it still remains in fourth place. The top three teams earn automatic berths and the fourth-place team advances to a World Cup playoff.

68th min.: SUBS – Final three subs for the USA: Pepi, Roldan and Yedlin on for Zardes, Weah and Moore. Like-for-like subs. Meanwhile, Panama’s Armando Cooper comes in for Godoy and Eduardo Guerrero is on for Rolando Blackburn.

63rd min.: Strong combination play by Panama down the right side, deep in the U.S. half. It’s threatening, but no end product. Panama not backing down.

54th min.: Goal Panama! On a corner from the right side, Anibal Godoy gets a touch with his head, the ball goes off Gyasi Zardes and in. The USMNT was having a strong start to the second half. Panama is dangerous on set pieces.

46th min.: SUBS – Tyler Adams and Brenden Aaronson on for Yunus Musah and Paul Arriola. And Adams immediately getting stuck in.

Halftime: The USMNT has simply been slower, less cohesive and second to every ball. There have been no standouts for the Americans outside of goalkeeper Matt Turner. If the Panamanians had been more clinical around the area, they could’ve had the lead in this first half. Turner came up with some big tip saves. It was perhaps too much to expect crisp play from a starting XI when there have been seven changes to the USMNT starting lineup.

45th min.: What a save by Turner! Quintero finds Barcenas on the right and he curls a ball to the far post that Turner has to tip away for a corner. It was going in. Panama has been the better side here by a country mile.

42nd min.: In the last 10 minutes or so Alberto Quintero is the roaming player while Edgar Barcenas has gone wide right. It’s causing the USMNT problems when they can find him in the space behind the U.S. midfield.

34th min.: Giveaway by the USA (Kellyn Acosta) and Alberto Quintero is driving down the heart of the USMNT defense, he dishes to Gondola, but Matt Turner comes up with the one-handed save. It wouldn’t have counted for a really tight offside. Sloppy from the USA so far.

27th min.: Not making this up — Panama just attempted two olimpicos (goals off corners). Matt Turner has to tip both curling balls out of play.

25th min.: Yunus Musah is the brightest player on the field for the USMNT and starts the move that frees Sebastian Lletget on the left. His cross into the box misses Paul Arriola, who wanted the penalty call. He felt he was held in the box. No call.

21st min.: It’s been a passive start by the USA. Gregg Berhalter looks frustrated on the sideline. The Americans can’t keep any sustained possession and Panama is going right back down their throat.

14th min.: Fantastic cross into the box by Gondola on the left and Rolando Blackburn can’t get on the end of it. A great cross on the edge of the U.S. six-yard box.

11th min.: Panama now enjoying a spell of play and no surprise that the threats are being generated out wide. Alberto Quintero active on the right and Freddy Gondola on the left. The USMNT is absorbing the pressure well so far.

4th min.: Early corner kick for the USMNT and Walker Zimmerman sends a header which the ‘keeper, Luis Mejia, tips over the bar.

1st min.: We’re off. A Nashville SC player captaining each side:

Walker Zimmerman captaining the USMNT in a World Cup qualifier against a Panama side captained by Aníbal Godoy. After the fight it took to get @NashvilleSC here, I’m not going to lie, I’m a little caught off-guard with the emotions I felt watching that coin flip.

6:05 p.m.: Pregame festivities are out of the way. Teams are in position. Match is set to kick off.

4:31 p.m.: The USMNT takes an undefeated record into the Rommel Fernandez.

🇺🇸 #USMNT is unbeaten away vs Panam (3 wins, 2 draws), including 2 wins & 2 draws in World Cup qualifying.

4:04 p.m.: Fans already making their way inside the stadium:

How to watch Panama vs. USA

The USMNT’s fifth World Cup qualifier will be broadcast in Spanish on Universo, which also streams on fuboTV , which is available on a free 7-day trial .

New users can sign up for a free seven-day trial of the live sports streaming service, which can be accessed via iOS, Android, Chromecast, Amazon Fire TV, Roku and Apple TV as well as on a web browser.

The English-language broadcast will be carried by Paramount+.

Matt Turner, Walker Zimmerman, Yunus Musah and Paul Arriola are the only repeat starters as U.S. manager Gregg Berhalter makes wholesale changes to the side. The USMNT is without Weston McKennie, Antonee Robinson and Zack Steffen, who all headed straight to Columbus, Ohio in preparation for the third and final World Cup qualifier to be played in October on Wednesday against Costa Rica. McKennie is resting a sore quad, while Robinson and Steffen will sit out the trip to Panama to avoid UK travel restrictions which would have required an extended quarantine after travel to that country.

DECOURCY: Pepi was the one dual national the USMNT had to have

As far as changes from the lineup that lost 1-0 on Thursday to El Salvador, wide midfielder Jose Luis Rodriguez is replaced by Freddy Gondola. Center mid Abdiel Ayarza is out, with former Columbus Crew wide mid Cristian Martinez taking over his spot.

A total of 14 out of 19 matches in official competitions between these two teams have been decided by one goal or fewer. Four of the five results that were more lopsided happened to be U.S. home matches during World Cup qualifying. Berhalter teed this one up for the betting crowd:

“They don’t let up a lot of chances,” Berhalter told media in Panama. “They have the lowest expected goals [against] of the first four games. We’re second lowest. [They’re a] strong defensive team, heavy crossing team. The one outlier game was the last game, and I don’t know if you saw the field conditions and what they were dealing with, it was a very difficult game to play. It was monsoon-type rains, field was flooded. It was an abnormal game. It’s a good team. It’s a very physically strong team. They’ll be very aggressive in duels, they’re very good attacking in the penalty box.”

The Panama +0.75 Asian Handicap refunds half the bet if Panama loses by a goal. A draw or a Panama victory is a winning bet.