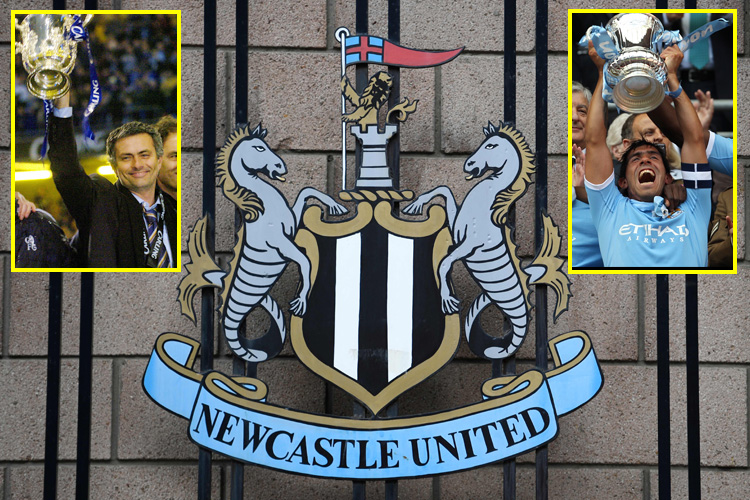 Following the news of Newcastle’s blockbuster £305million Saudi-backed takeover, everyone is wondering how long it will take for the Magpies to reach the top.

The man funding the game-changing purchase, Mohammed bin Salman, reportedly has a net worth of £320billion, which would make Newcastle the wealthiest football club in the world.

Supporters are already dreaming of huge signings and big trophies, but caution has been urged with the club still in the bottom three and in a relegation battle.

But for fans daring to dream, there’s plenty of precedent for how long it takes for investment to turn into silverware, with Chelsea and Manchester City both seeing a cash injection take them to the top of the game.

The pair met in last season’s Champions League final, after years of investment from their oil-rich owners brought in world-class players and top honours.

Roman Abramovich’s purchase of Chelsea in 2003 has seen the Blues win more trophies than any English side since his arrival, picking up 19 honours whilst becoming one of the world’s premier sports teams.

Five years later the Abu Dhabi United Group took control of Man City, and have dominated the Premier League and domestic cup competitions, taking five of the past 10 league titles on offer.

Abramovich was usurped by Sheikh Mansour’s incredible wealth at City in 2008, but Bin Salman blows them both out of the water, and may soon be doing the same on the football pitch.

How long that will take depends on how well the club is run, but as Abramovich and Chelsea showed, turnarounds can be fast.

The Blues were in a far more advantageous position than Newcastle, having finished fourth the season before the Abramovich era began, but after a trophyless campaign under Claudio Ranieri, sweeping changes were made.

Jose Mourinho was quickly brought in after winning the Champions League with Porto, and a whole host of high quality names were added to the squad.

Future England right back Glen Johnson was Abramovich’s first senior signing, while Joe Cole also made his way over from West Ham.

Striker Hernan Crespo was the priciest incoming that summer, joining from Inter for £23m, closely followed by Damien Duff from Blackburn, Juan Sebastian Veron from Manchester United and the legendary Claude Makelele from Real Madrid.

Chelsea’s spending totaled approximately £153m, a gigantic fee for the time, and one that soon paid dividends.

The Blues won their first silverware under Russian ownership in February the following year, beating Liverpool 3-2 in the League Cup final.

The winning mentality was secured, with Mourinho following up with Chelsea’s first Premier League title win three months later, and it’s largely been uphill ever since, despite a huge managerial turnover.

Having already seen £70m worth of investment during the short-lived tenure of previous owner Thaksin Shinawatra, Sheikh Mansour and chairman Khaldoon Al Mubarak had plenty of work to do.

And they kicked it off with a bang, bringing in one of the game’s highest-rated young Brazilians in the shape of £32.5m Real Madrid forward Robinho.

Vincent Kompany joined from Hamburger for £7m along with Nigel de Jong for £16m, and Pablo Zabaleta was a similar bargain when he also moved for the same price as Kompany, who now has his own statue outside of the Etihad.

Despite the £140m backing, Hughes failed to win a trophy at City, and was sacked 18 months later after a disappointing 10th place finish in the league.

Roberto Mancini was his replacement for the second half of the campaign, and despite another trophyless season, the team progressed to fifth.

The glass ceiling was then broken the following year when Mancini guided the team to third in the league, ensuring Champions League football for the first time, while a first trophy was won when City beat Stoke 1-0 in the FA Cup final.

Newcastle are currently in a far worse position than both Chelsea and City when their takeovers happened, but they also have far more money than their Premier League rivals, meaning supporters’ dreams could become a reality far more quickly than anyone was expecting.

Play talkSPORT Selector and you could win big money