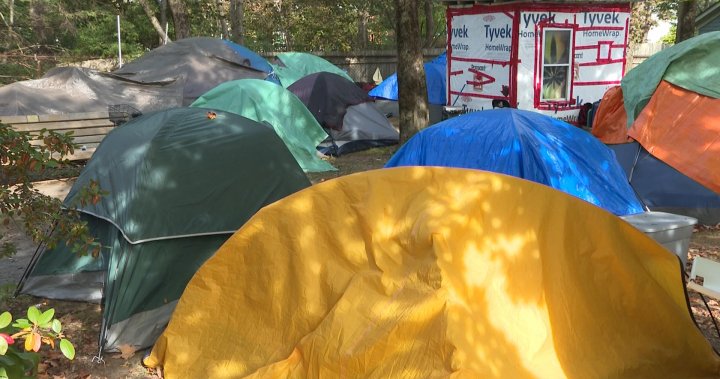 Craig Stewart is one of several people sleeping rough in a Halifax park that’s been renamed “People’s Park” by the citizens and allies who support unhoused residents.

“We’re all, kind of, sticking together and we’re all trying to be respectful. Especially, of our neighbours,” Stewart said.

People’s Park was established by people concerned over the housing crisis and the forcible police-led evictions of Halifax encampments on Aug. 18.

“It’s nothing for us to get between one and four people showing up here in the night,” Stewart said of the growing number of people pitching their tent at the park.

The Halifax Regional Municipality plans to start erecting some of the 24 modular units it’s purchased with the emergency housing funds recently approved by Regional Council.

The approval came following the police-led evictions of people sleeping in city parks that resulted in widespread public backlash and criticism.

Jenkinson’s research focuses on the widening gaps in health and social services for people who experience houselessness.

She says the increasing number of forcible, police-led evictions of people sleeping rough in encampments across Canada highlights the need for governments to start investing in supportive housing.

“What we really need to do is just create spaces that people can move into. Encampments exist because there’s nowhere else for people to go,” she said.

Jenkinson says residents who move into social housing settings, like modular units, need a wide range of social supports in order to help them stabilize their lives.

“Case manager supports, harm reduction supports, mental health supports, these are all really necessary social services to help keep people housed and keep their well-being supported. Without these supports, people can fall back into homelessness,” she said.

The Halifax Regional Municipality is waiting on the provincial government to invest in wraparound social support services for the modular housing units.

The provincial government has recently stated that talks are ongoing about how to best support the municipality’s endeavor but a financial commitment has yet to be made.

Meanwhile, unhoused residents like Stewart continue to seek refuge in encampment communities because he says they’re often a safer option than traditional shelters that are overcrowded.

“You’re more herded together like cattle, I mean like, it’s not like there’s a lot of privacy, people are together and there are temperments, and everything else that goes on in them places,” he said.

Jenkinson is hopeful that nationwide attention on the housing crisis will continue to pressure governments to start responding to the ongoing need for supportive housing investments.