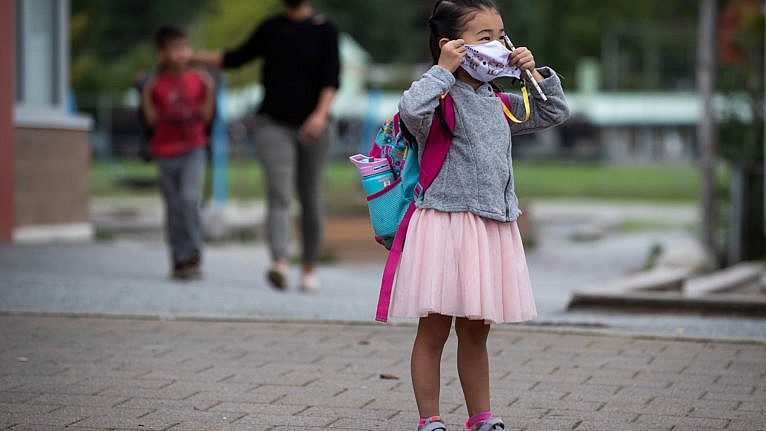 Vaxx Populi: The answer varies by province, but some jurisdictions could do a lot more when it comes to masking and rapid testing

“How are the kids doing?” is a question whose answer depends on where one lives. In British Columbia, before classrooms reopened, the rate of infection for those under 10 years of age stayed below that of older residents, though all rates were rising, according to the BC COVID-19 Modelling Group. The panel warned that children under 12 not yet eligible for inoculation make up nearly half of the unvaccinated population in the province, making them a large risk group, especially as they have high numbers of contacts.

On Sept. 8, the day after school began, the under-10 rate of new cases per 100,000 population exploded in a sharp upward trajectory while the rate for those 10-and-older stayed pretty much flat. By the end of the month, the rate of COVID-19 among unvaccinated children was more than double that of older residents.

In neighbouring Alberta, data was harder to obtain as the province restarted reporting data on COVID in the classroom just before Thanksgiving. By then, 54 schools reported outbreaks (10 or more cases) and a total of 756 of the 2,400 schools in the province had at least two cases. The situation also isn’t good in New Brunswick, which reintroduced masks in schools by mid-September and where rising case counts forced more than a dozen schools to shift to online learning a week ago.

The number of students contracting COVID-19 in Alberta, B.C. and other hotspots highlights a pressing worry for both parents and decision-makers: children are now the largest unvaccinated group, vulnerable to a variant that has proved highly efficient at finding pockets of unprotected victims—especially those who are in congregate settings like schools for hours each day.

Are governments doing enough to mitigate the risks during the third school year affected by this pandemic? And how close are we to vaccinating our children?

Ontario, whose education system was pummelled by COVID-19 earlier in the pandemic that students spent much of their school year online, has largely avoided the problems plaguing the West. Its number of daily new cases in schools has been essentially flat since the school year started, with 16 per cent of schools reporting at least one case. One key difference may be mask mandates, especially for unvaccinated children. Well before school began, Ontario announced that face coverings would be worn by everyone from Grades 1 to 12. In contrast, it took until Oct. 1 for B.C.’s provincial health officer, Dr. Bonnie Henry, to extend the province’s mask mandate to students in kindergarten to Grade 4.

“There are a list of options on the table for how to mitigate transmission in schools and some of those options haven’t been pursued to the extent that they could be,” says Dr. Devon McDonald, an ICU physician in Lindsay, Ont. He singles out the Toronto public school system, which enacted stricter public-health protocols than those mandated by the province, including requiring students to remain within their cohorts, even during lunch, and masks for even kindergarteners.

McDonald also wonders if another reason could be Toronto’s investment in HEPA filters, which are operating in many of its classrooms. As of Tuesday, the vast public school system had reported only two schools out of 583 with more than 10 cases, with one closure.

Another tool being rolled out in more and more provinces: rapid testing for students. In September, Quebec began having schools in hot spots administer rapid tests to kids who display symptoms; the system went provincewide this week. In an effort to keep schools open, New Brunswick began distributing rapid tests on Tuesday to students who are deemed close contacts to someone who has COVID-19. As of now, one quarter of the province’s schools have COVID-19 cases, CBC News reports.

Ontario has gone a different route. On Oct. 5, it announced that it would provide rapid tests only to public health units experiencing a high risk of transmission so they could test asymptomatic children.

McDonald is a proponent of rapid testing on a much larger scale, pointing out it is almost ubiquitous in the United Kingdom, where households are given free tests, as well as in Europe and Asia. He did rough math on what could happen if Ontario tested all students, using a popular rapid test’s own error rates. He determined that the province could expect to find and remove 4,156 infectious students from the classroom while the tests would miss 144 infectious students, though the vast majority, 988,730, would be correctly identified as negative.

At the same time, his basic calculations found that 6,970 students would receive false positive results, though he believes that rough analysis could be high. Those students would be away from classrooms for a day or two until more precise PCR tests came back negative. “I think we would find we would be better off accepting some school absences due to false positives,” he says, “rather than the current situation, where we have entire schools closed because of COVID-19 outbreaks and classrooms transitioned to online learning.”

And for students, teachers and parents, hope is building that those ages 5 to 11 will soon be eligible for COVID-19 vaccines. This week, Pfizer is expected to seek approval from Health Canada, while Procurement Minister Anita Anand tweeted that the federal purchase agreement with Pfizer “allows for access to pediatric doses upon the receipt of regulatory approval” and that they intend to make doses available as soon as possible. B.C. is already prepping for that day. Over the holiday weekend, it opened its COVID-19 vaccine registration system to kids 5-11, so they can be notified as soon as appointments are available.

Vaccinating children could dramatically help Canada reach its goal of getting more than 90 per cent of the population protected against COVID-19. Trevor Tombe, an economics professor at the University of Calgary who has been crunching vaccine data, told Maclean’s that there are 2,885,026 individuals aged 5-11, as of 2020. Assuming children got vaccinated at the same rate as the 12-17 age group (85 per cent have at least one dose and 76 per cent with both doses, according to his estimates), that would add more than six percentage points to our national tally, which currently sits at 77.1 per cent with one dose, and 71.3 per cent fully vaccinated.

As well, anecdotes and social media posts suggest many children and their parents are eager to get them vaccinated as soon as possible. One nine-year-old girl informed this reporter of exactly what she’s going to wear when she gets her first dose (for the record, there will be lots of pink). She’s still thinking about style options for her second shot.