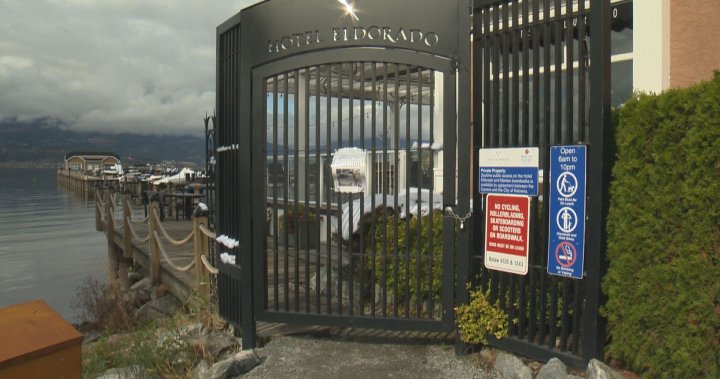 When COVID-19 first hit, the gate by the Eldorado Hotel was latched and locked, much to the dismay of the City of Kelowna.

The business blocked residents and tourists from continuing their waterfront stroll along the boardwalk.

Sometime around June 2020, the city cut the lock on the gate, according to court documents, and then the business re-locked it.

That prompted the city to seek an injunction that the gate be open from sunrise to sunset every day. Officials also wanted a copy of the key.

In civil documents, the Eldorado disputes that it even owes the public a right of way.

It’s also arguing that the restaurant can’t maintain a safe outdoor eating area following COVID-19 dining restrictions as long as the public is allowed to walk through it.

In court on Wednesday, the judge largely based his ruling on current COVID restrictions.

He said the Eldorado may prevent access to the boardwalk when outdoor dining is open for business, but the gate must be open when the patio is closed.

If COVID-19 restrictions loosen, the city can ask for the injunction to be changed with three days’ notice to the Eldorado.

Both the Eldorado and the city declined an interview, saying they need time to get a clearer picture of the details before commenting.

The case is still expected to head to trial, according to the judge, where the focus would be on whether or not the Eldorado is legally obligated to provide public access to the boardwalk.

The business claims the right of way declaration is invalid and unenforceable.

The city says it gave the previous property owner permission to develop the marina as part of a deal where one of the conditions was that a public right-of-way walkway was developed.

Should both parties move forward in the legal battle, the judge said he expected a trial would be held within a year.