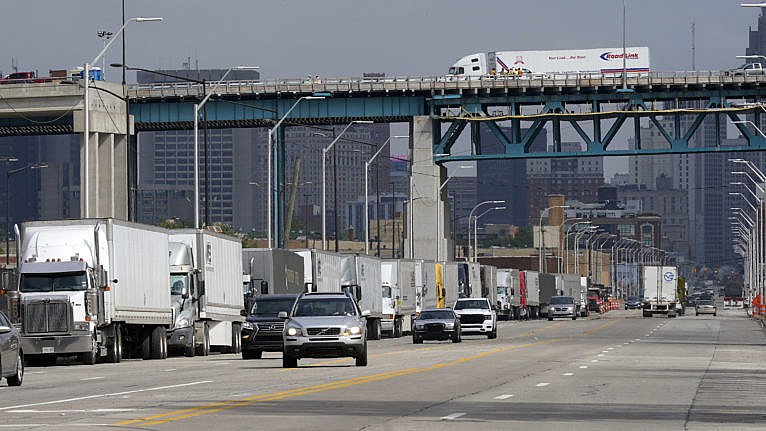 The Buffalo News reported Tuesday night that the U.S. side of the Canadian border will open to vaccinated Canadians starting in early November.

“Since the beginning of the pandemic, members of our shared cross-border community have felt the pain and economic hardship of the land border closures,” said Schumer, a New York Democrat. “That pain is about to end. Very soon, the link between New York and our northern neighbors will finally be re-established, reuniting families, bolstering businesses and ending a frustrating cycle of waiting for everyone involved.”

“It was a long time coming,” said Higgins, who had relentlessly advocated the reopening for months. “It should have happened six months ago.”

Lobbying from politicians on both sides of the border was getting increasingly intense. There is still uncertainty about whether the opening will apply to those with mixed doses.

Much like Michael Ignatieff, Chrystia Freeland became almost famous south of the border with her writings and media savvy. Unlike Ignatieff, she’s actually got some experience in government having ably run key ministries and, most admirably, outfoxed Donald Trump during the renegotiation of NAFTA. If she succeeds, she’ll be taking over from one of the world’s major media figures, Justin Trudeau. A little bit of profile doesn’t hurt.

Mulcair thinks, though, there will be other contenders for Trudeau’s job.

The most obvious one is the genial and exceptionally accomplished Mark Carney. Earlier this year at an event at l’Université de Montréal, where I teach, he was brilliant, generous with his time, and able to do the entire gig in French. I was impressed that he’d somehow managed to keep up his knowledge of the language of Molière during his lengthy stint in London as Governor of the Bank of England. This guy’s got game. Carney recently published a work on values (very progressive) and is a world leader on the issue of climate change and economic transition. He is currently working at the highest level of the United Nations, deepening his contacts and developing experience and expertise in areas outside of central banking. This promises to be one heck of a battle.

Wernick’s thoughts: Paul Wells had an interesting conversation with former top bureaucrat Michael Wernick, who has written a book, Governing Canada: A Guide to the Tradecraft of Politics, which sounds like it is full of interesting insight, even if he never spills the tea on a certain secret recording.

The resulting book is nearly devoid of juicy insider gossip—never Wernick’s style—but full of pithy advice to political leaders in general. “If you can end a meeting early and gain a sliver of time,” he tells prospective prime ministers, “get up and leave.” And, elsewhere, “It is rarely to your advantage to meet the premiers as a group.” And, ahem, “The longer you are in office, the more courtiers you will attract.”

There’s lots of stuff that politics nerds will like:

One of the recurring themes in Wernick’s book is how little time everyone has. A federal cabinet will have 100 hours in a year for all of its plenary discussions. Maybe 120. It’s never enough. “It’s overbooked from day one until the day they leave. And you’re always making choices: to do one thing means not doing something else. And mindful management of the allocation of time is really important. It can get away on you.”

Pandemic privilege: Conservative MP Mark Strahl told the Star on Tuesday that he opposes any vaccination requirement for MPs. He argues a vaccination mandate on the Hill would violate parliamentary privilege: “I know it’s kind of quaint — archaic, maybe — to talk about parliamentary privilege during a pandemic, but it’s been upheld through many crises … We’d better be very, very careful that we don’t cavalierly toss it aside.”

Fortin loses: A judge has struck down Maj.-Gen. Dany Fortin’s request for reinstatement as the head of Canada’s COVID-19 vaccine distribution campaign, CP reports. Fortin should have filed a formal complaint through the military’s grievance system before resorting to the courts, the judge ruled.

Fortin was removed as head of the COVID-19 vaccine rollout effort in May, five days before military police announced they had referred an investigation of alleged sexual misconduct to Quebec’s prosecution service.  The senior military officer, who previously served in Afghanistan and commanded a NATO training mission in Iraq before being assigned last November to lead the federal government’s vaccine rollout effort, was formally charged with one count of sexual assault in August. That case, which relates to an alleged incident dating back to 1988, is due back in a Quebec court on Nov. 5.

‘I’ve been exonerated’ The Globe has an interview with Admiral Art McDonald, who wants his job back. McDonald spent a month as chief of the defence staff before going on leave during an investigation into a 2010 incident alleged to have been misconduct. That investigation concluded without charges in August. “I’ve been exonerated,” McDonald told the Globe. “It is now time for the institution to step up, accept the results of the investigation, return me to my duties – or at least start a dialogue around an alternative approach.”  A spokesman for the Privy Council Office, says the “suspension remains in force” and that the “government is assessing all circumstances in determining next steps.”

External oversight: The Star has a thoughtful story based on interviews with experts who study military sexual misconduct. They are pleased that the government has recognized that the military does not “get it,” but they have not taken the steps necessary to force change.

“The military is not going to solve this on its own. There needs to be this external oversight,” said Maya Eichler, Canada research chair in social innovation and community engagement at Mount Saint Vincent University, who specializes in military sexual misconduct.

Some may get it: Writing for Saltwire, Scott Taylor opines that it is going to far to say the military doesn’t get it. Senior brass don’t, he writes, but the rank and file do.

Regrettably, Trudeau’s blanket statement should have been more targeted at the very senior command level of the CAF. The fact that the news of Dawe’s appointment generated enough internal reaction that it was subsequently leaked to the Ottawa Citizen means that many of the rank and file do in fact “get it.”

Could be more useful: Ontario’s vaccine website, where Canadians from the province can download the proof of vaccination, can’t be accessed from outside North America, Global reports. Canadians travelling abroad tell Global that the Ontario vaccine webpage was blocked. The province says it plans to fix the site.

NDP ponders election: The Toronto Star reports on the NDP’s internal debris-sifting. The party entered the recent campaign with high hopes but gained just a single seat. The party has appointed Bob Dewar — brother of the late Paul Dewar — to lead an internal “debrief.”