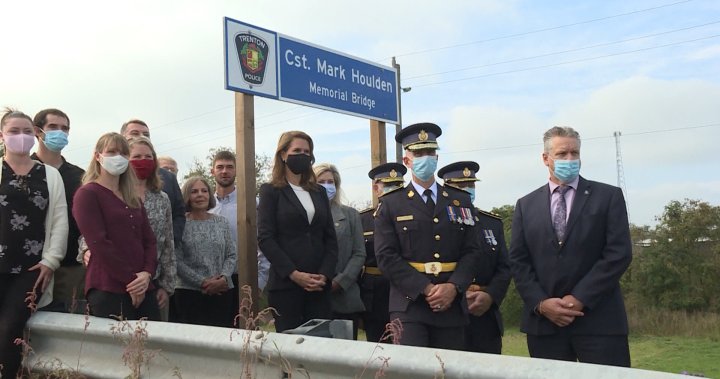 A dedication ceremony was held today in Trenton, Ont., to honour three Trenton police officers who died in the line of duty over 50 years ago.

“These officers have made the ultimate sacrifice while in the line of duty, and I am truly humbled by their selfishness and dedication in serving the people of Ontario. These bridges along Highway 401 will serve as a lasting, permanent tribute of these heroes,” said Caroline Mulroney, Ontario’s Minister of Transportation, who was in attendance.

Highway 401 bridges at Wooler and Glen Miller roads, along with the bridge at County Road 33, now bear the names of the three fallen officers.

“The three Trenton-area bridges pay tribute for the three extraordinary lives they (officers) lived, and the gift of service they provided to their community,” said parliamentary assistant to the Minister of the Solicitor General, Christine Hogarth.

Quinte West Detachment of the Ontario Provincial Police (OPP) was established in the early 2000s. Before this, Trenton had its own police service, Trenton Police. The OPP organized the service.

Family members were also in attendance.

OPP commissioner Thomas Carrique says recognizing fallen officers is important to their families, other officers and the community.

“It is a stark reminder to officers who travel under or over those bridges, and hopefully a reminder to the community, a reminder of the sacrifice that their officers make on their behalf to protect our communities and serve and protect our citizens,” explained Carrique.