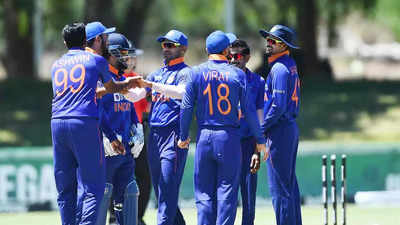 Following India’s 7-defeat in the second ODI to South Africa, It is clear that there are some areas in which India needs to look at in terms of their white-ball game. With a T20 World Cup in October, followed by a 50-Over World Cup the following year, let’s take a look at what needs addressing.

Lack of intent in first 10 overs

Although Shikhar Dhawan, Rohit Sharma, and KL Rahul have been consistent performers for India at the top of the order, they seem to always take their time to play themselves in and waste too many balls. If you look at Roy and Bairstow, all they need is five to ten balls to suss out the pitch and conditions, and then they go hell for leather in the powerplay.

If I were Rahul Dravid and Rohit/Rahul, I would seriously look at having someone like Ishan Kishan or even Rishabh Pant, who are both instinctively attacking batsmen. Rohit will with no doubt open the innings when he returns, but I think having a naturally aggressive batsman alongside at the top of the order, would give India a bit more impotence at the start of the innings.

K.L Rahul may be better suited in the middle order, as he is capable of adapting to different situations. Also, if I were Shikhar Dhawan, I would maybe think about what the opposition least wants, which is the score to keep ticking, and that is the issue with him at the moment. If he can have a bit more intent at the top of the order, that’ll be the difference between the team consistently getting above 330 than 280-300. Hence why giving somebody like Pant or Kishan the license to go hard at the top of the order might be a better option.

Another big issue of the men in blue is their 5th and 6th bowling options, with Hardik Pandya out of the side due to injury, India has been searching for a seam-bowling all-rounder. Venkatesh Iyer was picked in the squad for the ODI series as an all-rounder. Although he made 2 and 22 with the bat in the two ODIs, he did not bowl a single over in the first ODI and bowled only half of his allotted 10 in this game.

Perhaps he could be asked to bowl a few in the first 20 overs of the game. Also, when Thakur got de Kock out, Rahul took him out of the attack. Why? If you want to bring back Bumrah, make him bowl at the other end. Don’t take off a bowler who has just got you a wicket, it’s just naive.

Bhuvneshwar Kumar by no doubt is a top-class white-bowler, but 0-64 of 10 overs in the first match and 0-67 off 8 in the second is a worry. His biggest asset is getting the new ball to swing, and take wickets, which is something he hasn’t done for a while. maybe it’s time for somebody like Deepak Chahar to have a go.

India is a proud cricketing nation, there’s no doubt about it, but there are major changes needed if we want to see the best of them, especially in white-ball cricket.

Tune in to the latest sports news and gossip at World In Sport.