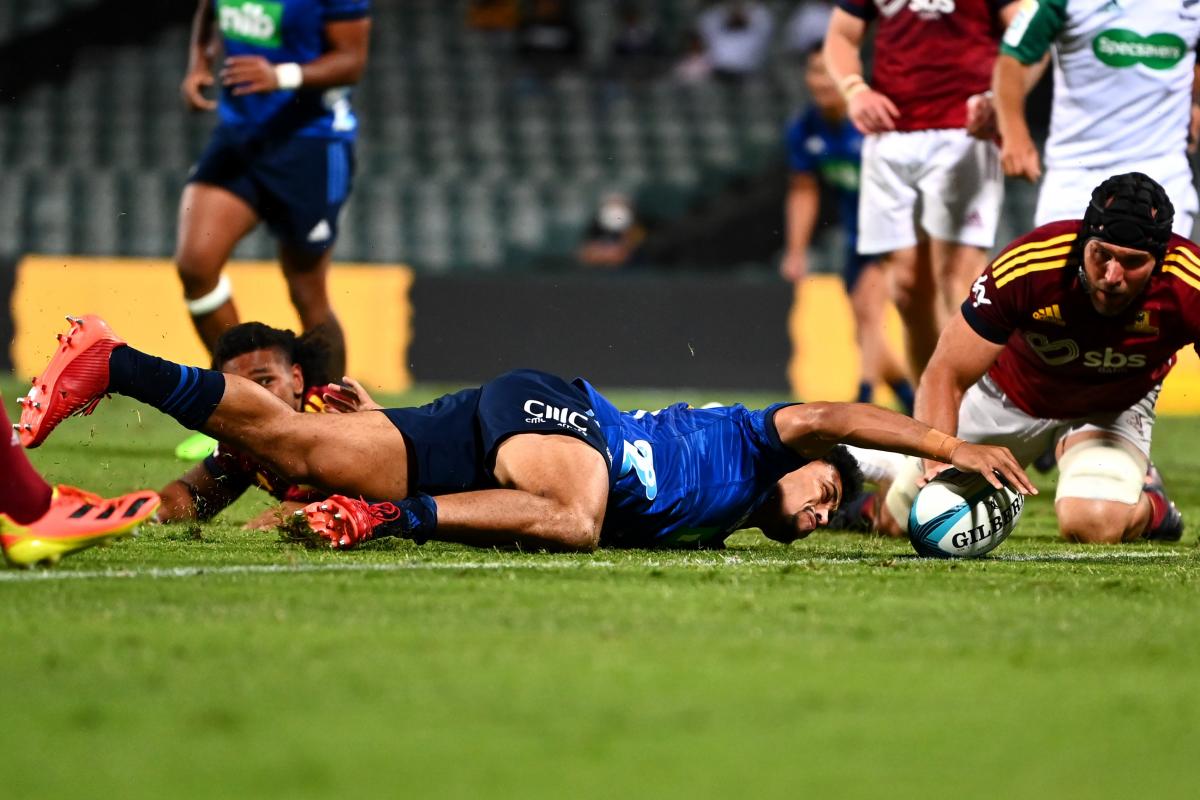 What advantage? The Highlanders will still be wondering about that.

The Blues knocked the ball on but a wonky clearance from Scott Gregory ended badly.

The Blues attacked. Winger Mark Telea went around an opponent and got the pass to Taine Plumtree who scored in the corner to complete a brace of tries for the loose forward.

It was a key moment early in the second half of the Super Rugby Pacific match in Albany tonight.

The Blues had trailed 13-3 at the break but scored twice through that man Plumtree, who had a storming game.

But his second try, well, it was advantage all right – advantage for the Blues who ended up successfully defending the Gordon Hunter Memorial Trophy 32-20.

The Blues had to deal with a Covid-19 outbreak late in the week. They confirmed a small number of players in the squad had tested positive. All Blacks Beauden Barrett and Nepo Laulala were among the late scratchings.

The Highlanders also reported positive tests this week, while earlier in the week the Hurricanes were forced to withdraw from their match against Moana Pasifika following a major outbreak which left them unable to field a side.

The Highlanders came up with a couple of early fumbles and found themselves under pressure.

Caleb Clarke should have scored in the corner but Aaron Smith did enough to disrupt the powerful winger and he lost the ball with the line in sight.

The Blues had to settle for penalty to Stephen Perofeta.

Mitch Hunt replied with a long-range effort to level the score 15 minutes in.

Thomas Umaga-Jensen busted a tackle and half way through the next. But it was a deft off-load which proved more threatening.

He got the ball to Scott Gregory and the Highlanders pressed forward. The move petered out but the penalty came and Hunt converted the opportunity.

But the Highlanders big break came through an error in judgement from Blues lock Luke Romano.

The Highlanders were driving towards the line. Romano collapsed the maul, got himself a yellow card and conceded a penalty try. He spent the next 10 minutes seething from his plastic seat.

Worryingly, Umaga-Jensen hobbled off shortly after. He has had an horrific run on injures and was a big loss. Another bigger loss was the blown lineout move from 10m out late in the half.

Highlanders winger Liam Coombes-Fabling picked up a knee complaint and did not return for the second spell.

The Blues struck back shortly after the resumption. They spun it wide to Dalton Papalii, who got the ball inside to Plumtree.

That try could be traced back to a throw Liam Coltman which had too much porridge behind it.

Plumtree’s second try knocked the stuffing out of the Highlanders.

Telea, who had an impressive game, collected an up and under in his finger tips and got an offload to Bryce Heem who showed good pace and got the ball inside to Rieko Ioane to score.

Champagne rugby. They took advantage of the Highlanders’ rejigged backline and exploited a mismatch with Mitch Hunt, who had shifted to the wing.

The game dragged on in the endless search for a bonus point.

Some 10 minutes past fulltime the final whistle blew.