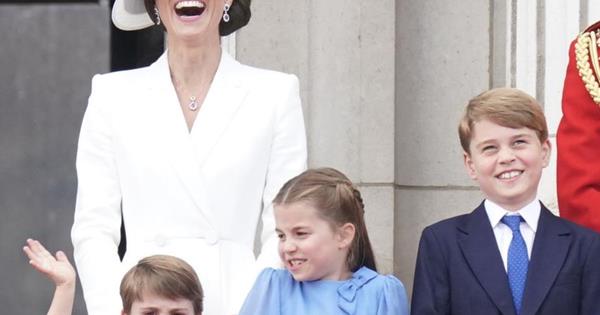 Due to the COVID-19 pandemic, it’s been three years since we’ve seen the royal family stand together on the Buckingham Palace balcony for the Trooping the Colour celebrations.

Who could forget the then one-year-old Prince Louis enthusiastically waving to the crowds in his adorable blue shorts?

However for this year’s celebrations, a particularly special one for the Queen’s Platinum Jubilee, Prince William and Catherine, Duchess of Cambridge’s three children Prince George, eight, Princess Charlotte, seven, and Prince Louis, four, looked all grown up as they joined their parents and royal relatives on the iconic balcony.

Dressed in a navy suit, Prince George looked every inch the future king as he looked below at the crowds.

Meanwhile his sister Princess Charlotte was simply adorable in a blue chiffon dress with a bow and plats in her hair.

As for the Duke and Duchess of Cambridge’s youngest child Prince Louis, he looked all grown up in his sailor outfit as he gawked at the festivities and exchanged words with the Queen.

Though the balcony wasn’t as packed as previous years, the Cambridges weren’t the only royals joining Her Majesty to wave to the crowds and watch the flypast.

Prince Charles and Camilla, Duchess of Cornwall, Prince Edward and Sophie, Countess of Wessex as well as their children Lady Louise Windsor and James Viscount Severn, Princess Anne and husband Sir Tim Laurence, the Duke and Duchess of Gloucester, the Duke of Kent and Princess Alexandra also joined the 96-year-old monarch.

Ahead of the event, a Buckingham Palace source said: “After careful consideration, the Queen has decided this year’s traditional Trooping the Colour balcony appearance on Thursday 2 June will be limited to Her Majesty and those members of the royal family who are currently undertaking official public duties on behalf of the Queen.”

At their last Trooping the Colour appearance in 2019, George, Charlotte and Louis were not old enough to ride in the carriage procession with their mother, Catherine, Duchess of Cambridge, but were spotted smiling from the window.

They then joined their parents to watch the flypast for a brief but memorable moment.

We already can’t wait for next year!