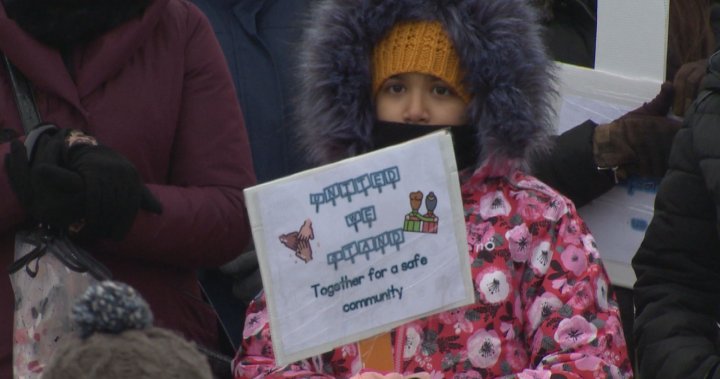 Dozens of residents connected to the Anjou borough gathered at Bocage Park Saturday to say ‘enough is enough.’

“It’s really bad that this is happening in our streets, especially so close to a school,” said Nella Sammartino, a protester with a son at Des Roseraies School.

The group was protesting rising violence in the area.  The marchers were prompted to speak out in response to a shooting on Dec. 2, 2021, on Roseraies Boulevard near Nantaise Avenue, in which a 20-year-old man was killed and a 17-year-old boy injured.

According to Montreal police it was the city’s 32nd homicide this year.

“But the violence has been here in Anjou for four years,” resident and protest co-organizer Patrick André Perron pointed out.  “Citizens around here have been talking to politicians to say there’s problems in the neighbourhood.”

According to him, the problems include prostitution, drugs and firearms, but people attending the march say the solutions are obvious.

Perron added that residents, too, have a role to support each other and take back the streets.

“If you have problems we have to speak,” he stressed.  “We don’t have to shut up and be scared.  We have to stand together.”

Marchers also pointed to the increase in gun violence on the island of Montreal this year, and the growing number of youth involved. So far three teenagers in the city have been killed as a result of violence this year.

The City of Montreal plans to host a forum in January 2022 on ways to cut firearm violence. A week ago the provincial government introduced plans to invest $52 million to tackle gun violence and crime.

Some people at the march in Anjou, like Sammartino, admitted to being scared by the violence but vowed to keep fighting.

“I’m not letting that take over,” she insisted. I’m really trying to focus on positivity and trying to offer something better for my son and the other families.”