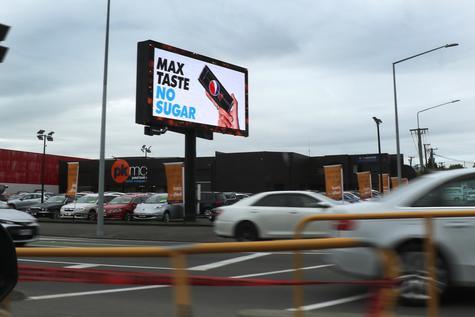 The digital billboard market is anything but static in Christchurch as companies and advertisers target prime locations, prompting a road safety warning. Chris Barclay reports on the ‘distraction’ for motorists.

The Automobile Association has urged motorists not to be distracted by the bright lights in plain view or out the corner of your eye as a key advertising medium gains even more prominence on the city’s landscape.

As Christchurch City Council staff sift through 25 applications to put up multi-messaging screens on traffic intensive routes, the AA has one point for drivers, cyclists and pedestrians: Be vigilant.

Digital billboards are becoming more visible as companies maximise exposure for clients while motorists pass by, are stuck in traffic, or wait for lights to change at an intersection.

That workload comes as a city council spokesperson said the organisation issued 75 resource consents for digital billboards and 12 certificates of compliance since January 1, 2010.

Crash data specifying billboard-related distractions as a factor is difficult to quantify – motorists are often reluctant to self-report poor behaviour if it shows they are responsible for a crash.

But Waka Kotahi NZ Transport Agency’s latest figures record distraction as a factor in 23 roads deaths and 125 serious injuries in 2020.

Categories of distraction include taking your eyes off the road and thinking about something other than driving.

AA road safety spokesman Dylan Thomsen was unaware of digital billboards being a factor in a road accident, but distractions were undeniably a common cause of crashes.

“The latest available crash statistics in New Zealand show 18 per cent of crashes involving injury involved inattention and 18 per cent involved a failure to see another party, with some accidents having involved both factors,” he said.

“Digital billboards, especially ones that have moving text or pictures, definitely have the risk to distract a driver’s attention and when people are driving we want them focused on what’s happening on the road around them.”

Thomsen added while advertising was always going to be present in urban environments, safeguards were required.

“From a road safety perspective, you would not want to have the signs positioned anywhere that could make a driver miss seeing other important signs like speed limit changes, a pedestrian crossing or a school zone sign.

“They also are not ideal in busy environments – like a multi-lane intersection, for example – where drivers already need to be focusing on multiple things like oncoming traffic, vehicles behind them and pedestrians.”

Attempts to put up digital billboards invariably lead to debate between transport planners and engineers engaged by applicants and on behalf of the local authority.

“In essence, I do have concerns if a billboard forms the backdrop to a traffic signal. But it gets quite complicated quite quickly,” said senior traffic engineer and transport planner Axel Downard-Wilke, a director at ViaStrada Limited.

City council staff and hearing commissioners face a balancing act as the District Plan acknowledges digital billboards have “the potential to cause distraction or confusion to motorists” but also recognises “signage collectively contributes to Christchurch’s vitality by: Supporting businesses, infrastructure and community activities; maintaining public safety and enhancing character and amenity values.”

The city council did not have a figure available on the number of digital billboards on display in the city, but major players Go Media and LUMO currently have eight locations apiece listed on their websites.

LUMO have sites on Riccarton Rd and Tuam St “coming soon” while they successfully persevered with a location on Lincoln Rd near the Moorhouse Ave intersection across from Hagley Park.

The application at the Gull service station site was declined because the billboards would have been erected within the required 50-metre set back from the Moorhouse/Hagley/Lincoln/Grove intersection.

LUMO was subsequently granted a certificate of compliance for two double-sided billboards outside the set back in March, 2021 while the billboards reduced in size from 29.2sq m to 18sq m.

While the city council has jurisdiction over digital billboards in the city, Waka Kotahi deals with applications for state highways.

“In order to limit and mitigate the safety risks of digital advertising billboards Waka Kotahi seeks to use the provisions of the Resource Management Act 1991 as much as practicable to prevent unnecessary harm,” a spokesperson said.

The agency is currently reviewing their digital billboard document, which will eventually be incorporated into the recently released Road to Zero Strategy to reduce the road toll.

“It goes without saying that anything designed to capture the attention of drivers can cause a concern for safety,” he said.

“However, now the majority of speed limits have become a crawling pace of 30km/h in central city areas and 80km/h or slower on the open road, it’s probably a good thing because driving at such a slow speed no longer requires much brain capacity and distractions are going to help stimulate the brain and, therefore, concentration levels while driving.”