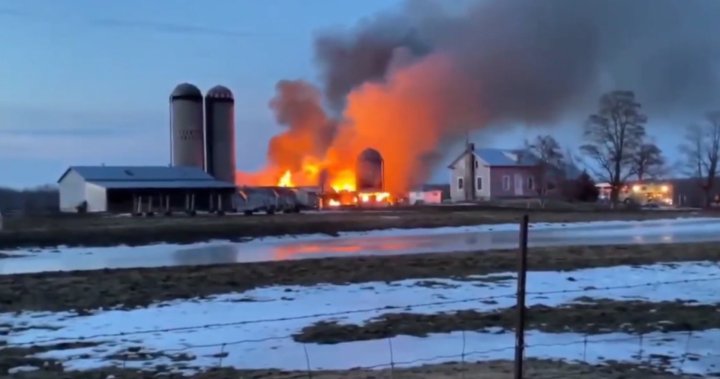 A barn was destroyed in a fire that ripped through it around 5:30 p.m. Thursday.

The barn was located at J&J Farms on Craigen Road, just northeast of Napanee.

Video of fire shows a portion of the barn in flames, along with heavy black smoke.

According to social media, there were animals in the barn at the time of the blaze. Reports indicate that the horses were saved from the fire, but there were cows, pigs, chickens and horseback riding equipment lost in the incident.

The quick response by the Stone Mills Fire Department, along with support from the Napanee fire department, were enough to limit the fire to the barn.

Stone Mills Deputy Fire Chief James Richmond says the barn is a total loss and estimates the damage at approximately $600,000, but couldn’t accurately estimate the cost of the livestock and equipment lost. An investigation into the cause is ongoing.

On Facebook, one of the farm’s employees, Val Lacasse, asked residents from the surrounding area to help recoup some of the items lost in the fire. She said they’re looking for spare hay, halters, lead ropes, grain and grain buckets.