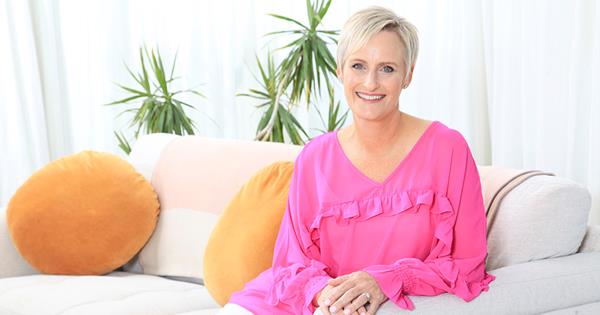 Sarah Kane will never know for sure if an earlier diagnosis could have changed her breast cancer journey. But the identical twin and mother-of-two, who waited five months for a mammogram because of Covid delays, will do anything to help others avoid living with these doubts.

According to Breast Cancer Foundation NZ, Sarah is one of more than 50,000 Kiwi women who have been unable to attend routine breast screening due to Covid-19 lockdowns and the related delays. The 49-year-old Aucklander initially booked in for May 2020, but her appointment was rescheduled multiple times and it was late September when she was finally seen.

“I jokingly said, ‘Well, I hope I don’t have cancer.’ But it didn’t worry me. I had absolutely no reason to believe it wouldn’t be a normal outcome,” says Sarah, who has had annual mammograms since she was 40 and has no history of breast cancer in her family.

Shockingly, several days later, Sarah received an urgent request to come back for more testing. Her worst fears were confirmed – breast cancer. Three weeks later, she had surgery to remove
a 15mm grade 2 tumour, which thankfully was contained and hadn’t spread to her lymph nodes.

Twelve months of debilitating fatigue followed as Sarah underwent radiation and battled the ongoing impacts including lymphoedema (swelling in the arms and legs) and hormone medication. She was regularly bedridden from exhaustion.

She says it caught her off guard just how challenging it was, and she’s struggled to give up walking and Pilates.

“I’m normally very active, so I found it really hard having no energy for anything. When I first went back to work, all I could do was go to work, come home, go to bed and then all weekend was spent recovering.”

Mentally Sarah is still living with the fear of recurrence, but life is slowly returning to normal. Her energy levels are increasing, she’s exercising again and loving being back at work as a regional manager for Qantas.

“My job is really fulfilling,” she shares. “Since December, I’ve been travelling a lot, preparing for the international restart. It’s been an incredible experience that’s really helped move me from sickness to wellness.”

But the devoted mother will never forget the devastation of her diagnosis and having to tell her family.

“I thought I’ll just fit it into my schedule and get my mammogram done, and then boom my world turned on its axis,” recalls Sarah, whose twin sister Megan, and daughters Jessie, 26, and Bailee, 23, desperately struggled with the news.

“I felt really bad for causing them that distress,” she tells. “That upset me the most, how much it hurt them.”

But the close-knit family rallied together and she says their support, alongside husband Matt, 56, and family friend Jenna Tredwell, 23, who lives with them and is considered a third daughter, has been invaluable in her recovery.

She beams, “They placed no expectations on me around the house and did everything. They have also been an enormous moral support, taking me to appointments that are sometimes really full-on and quite frightening.”

Jessie lives in Australia, but Bailee and Jenna are so supportive of Sarah, they both took time off work to be with her at the Weekly‘s photo shoot.

This experience has encouraged them all to be more proactive with their health. After extensive testing to assess their risk factor for breast cancer, Sarah’s children have a plan in place to start annual screening once they turn 30.

During Covid lockdowns, breast screening in Aotearoa was stopped, which according to Breast Cancer Foundation NZ means 300 women have potentially missed diagnosis and treatment.

Screening has resumed but without immediate action, the foundation believes the catch-up will be too late for many, which is why they’re calling on the government to commit $15 million to urgently clear the mammogram backlog.

Sarah felt compelled to share her story after receiving such amazing support from the foundation.

“I wanted to speak up because I feel I have been disadvantaged with the stoppage of screening. I know there will be people out there not as lucky as me who get a terminal diagnosis or haven’t been able to access what they need, and that’s really upsetting,” she says.

“What is certain, is it was life-saving because where the tumour was located, on my chest wall behind my nipple, meant I would never have felt it myself.”

“Between the cancer and Covid, it’s really taught me about resilience and acceptance. I don’t let things stress me out now. If I can’t change it, I accept it,” says Sarah. “It has made me realise what is really important. I just grasp every opportunity that comes my way.”

**HOW YOU CAN HELP
#GiveUsOurMammograms is a new initiative from Breast Cancer Foundation NZ, calling for urgent action and increased funding to restore breast screening after Covid-19. The campaign encourages people to take a photo of themselves holding a #GiveUsOurMammograms poster and upload it to giveusourmammograms.nz. The foundation will then collate these and deliver them to the government.**