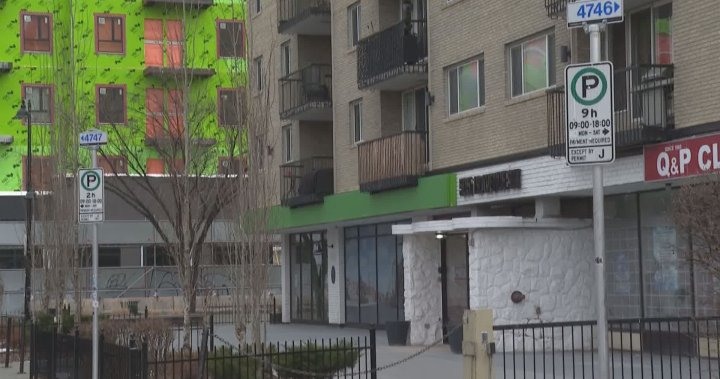 Changes to the city’s residential parking permit program made by the previous city council don’t take effect until next year, but some Calgarians are beginning to get their notice that they are no longer eligible for a permit.

Some affected Calgarians told Global News about the notices they received from the City of Calgary, but declined an interview.

According to the City of Calgary policy, residential buildings four storeys or taller or with more than 20 units will no longer be eligible for on-street parking permits as of Jan. 1, 2023.

“Residents who currently have a permit and live at an address that is no longer eligible for permits will be able to renew their permit for 2022, but will be advised in the coming weeks and months that the permit will not be renewed in the future,” a city spokesperson said in a statement to Global News.

On-street parking permits are renewed on a two-year cycle, and the city said there is time for people to “find alternatives for their parking.”

The incoming change stems from a decision made by the previous city council in January 2021 to overhaul the city’s parking policies.

The city said the changes were made to increase the “financial sustainability of the program, improve customer service and consistency” and to create a better use of street space.

Ward 8 city councillor Courtney Walcott said the city and its parking authority will be looking into the impacts to residents and making adjustments.

“It doesn’t mean it’s going to be perfect. Absolutely not — I would never say that everybody’s going to just find a new parking spot somewhere else,” Walcott told Global News.

“It’s just a matter of making sure that people know that these conversations are ongoing and information will be provided.”

The fee structure will also change at the beginning of next year.

For homeowners still eligible, their first permit will be free of charge but the second and third permits requested will cost $15.

According to a city news release at the time of the council debate, the parking permit program operates at a loss and the change in fees will result in a cost recovery of $290,000.

The change, according to Ward 9 councillor Gian-Carlo Carra, is to dismantle a costly regulatory environment that is creating “perverse outcomes.”

“I really think that the ultimate solution is, in high-demand areas, to have very thoughtful and sophisticated and neighbourhood-by-neighbourhood parking solutions, and everywhere else to just create more of an unregulated free-for-all,” Carra said Monday. “Because it’ll be a better outcome at way less cost to everybody.”

Carra said he hopes the changes will result in the use of more alternative modes of transportation in the city’s inner neighbourhoods.

“The more we expect everyone to be able to park right in front of every destination — by right — at cost to society, the less we’re going to be able to get to that outcome that I think everyone would like to get to, which is to live in a vibrant, exciting, walkable neighbourhood,” he said.

Terry Wong, the councillor for Ward 7, said he plans to advocate for different forms of parking in residential areas and has already begun discussions with the city’s transportation department.

For example, around the Foothills Hospital or the SAIT campus, what they are looking for is something that doesn’t treat them any differently than say, for example, if you live in Dalhousie, where you can park in front of a house without a permit, Wong told Global News.

“They’re looking for something that is some sort of equity.”

According to the city, people affected by the changes will be notified in the coming months with information, timelines and alternate parking options.