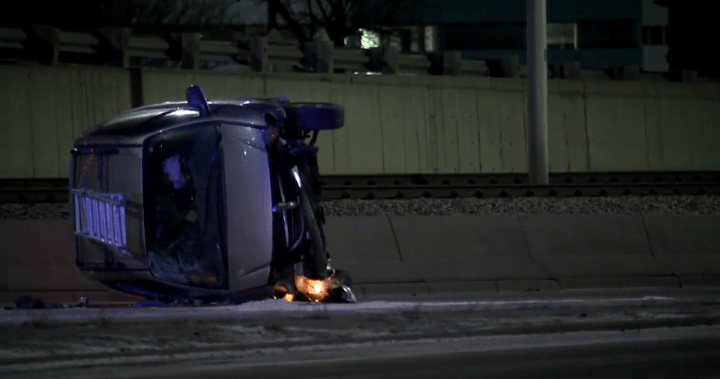 Calgary police believe a motorist and a cyclist were both impaired after a man riding his bike was hit by a van on Saturday.

Officers responded to the crash at 12:30 a.m. after an older Dodge Caravan heading east in the right lane of Memorial Drive near Deerfoot Trail S.E. struck a cyclist who was riding along the edge of the road.

Police said the 46-year-old man riding the bike was “projected nearly 20 metres and came to rest on a grassy median.” He was taken to hospital with serious, life-threatening injuries.

‘They loved their mommy so much’: Alberta sees increase in fatal collisions involving drugs, alcohol

“After striking the cyclist, the driver of the van steered left, crossed three eastbound lanes of Memorial Drive and struck the concrete barrier separating Memorial Drive from the LRT right-of-way,” police said in a news release.

“The van rolled and came to rest on the passenger side of the vehicle.”

Police said the 46-year-old man driving the van was taken to hospital with serious injuries.

Both the cyclist and the van driver were believed to be impaired by alcohol, police said, adding they think the cyclist was also drug-impaired.

Speed is not a factor, police said.