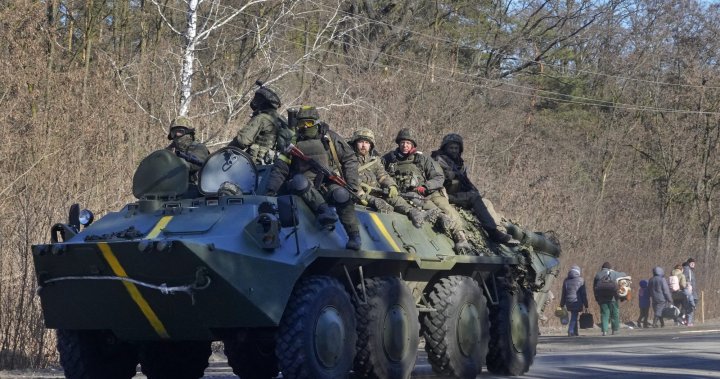 A majority of Canadians are supportive of the federal government’s actions against Russia over its invasion of Ukraine but are worried about the economic costs to their own lives, a new poll suggests.

The Ipsos poll conducted exclusively for Global News found strong support for Canada’s sanctions on Russian leaders, including President Vladimir Putin, and sections of the Russian economy including the oil sector. Eight in 10 Canadians surveyed said they would support even more sanctions.

And although less than half of Canadians who answered the poll said they are prepared to pay more for gas because of those sanctions, 73 per cent said doing nothing will encourage Russia to take further military action elsewhere.

“At the end of the day, even though many Canadians aren’t happy that they’re going to bear some of the costs of these sanctions, there is an acknowledgment in the polling that it’s still the right thing to do,” said Sean Simpson, senior vice president of Ipsos Public Affairs.

Ipsos surveyed over 1,000 Canadians online earlier this week for the poll.

The results found high support for Canada continuing the approach it has taken so far against Russia: further sanctions (81 per cent in favour); providing weapons and ammunition to the Ukrainian military (72 per cent); and sending Canadian Forces troops to neighbouring European countries to deter Russia (69 per cent).

Two-thirds said Canada should provide funding to the Ukrainian military, a move that has yet to be taken but has not been ruled out by Prime Minister Justin Trudeau.

Conversely, only 39 per cent said Canada should get involved in the military conflict directly — which Trudeau has said will not happen — while 61 per cent are opposed to engaging with Russia that way.

“This appears to be the line that Canadians don’t want to cross,” Simpson said.

“By and large … we’re seeing pretty solid resolve (for what Canada is doing).”

Canadians are relatively split over whether Canada is doing enough to help Ukraine so far, with 48 per cent agreeing compared to 39 per cent saying Canada should do more. Only 13 per cent said Ottawa has done too much and should scale back its support.

The poll also suggests Canadians are open to helping the people of Ukraine who are fleeing the country, a number that the United Nations says has surpassed 2 million.

Eighty-four per cent of those surveyed said Canada should send aid to countries bordering Ukraine that are welcoming those refugees, while 81 per cent said Canada itself should do whatever it can to accept refugees itself.

Despite that broad support, the poll found 85 per cent of Canadians are concerned about how the war in Ukraine will impact the economy at home. About two-thirds said they are worried about the impact on themselves and their own family.

Forty-seven per cent of Canadians who answered the poll said they were willing to pay higher gas prices due to Canada’s sanctions against Russia, compared to 53 per cent who disagreed.

“There’s a clear split on that feeling, and the split is by generation,” Simpson noted. “Younger people are saying that they can’t afford it, they’re not willing to pay more at the pumps. But older people say they’ve got no problem doing so.”

The poll found a 21-point difference between the percentage of people under 55 years old opposed to paying more for gas and those over 55.

But Simpson said the gap has been seen throughout the past two years of the pandemic as inflation and job losses mount.

“It’s not selfishness,” he said. “Many of them are already struggling to make ends meet. They’re already experiencing inflation. And now we’re asking them to to pay more for gas, to pay more for other goods when they feel like they’ve already sacrificed over the last two years.”

Yet 59 per cent still said the economic sanctions were the most effective way for Canada to punish Russia and potentially stop the invasion.

“There is an acknowledgment in the polling that it’s still the right thing to do, that the sanctions are hurting Russia,” Simpson said.

“So while (Canadians are) not happy about it and maybe many cannot afford it, they still, I think, grudgingly sort of accept that it is the way for us to do our part.”

Trudeau’s popularity up, but likely temporarily

The war in Ukraine has managed to raise the approval ratings of Trudeau and other Western leaders — but none of them are matching the Ukrainian president’s popularity. Among Canadians surveyed, 85 per cent said they approve of Volodymyr Zelenskyy, with 53 per cent saying they strongly approve.

But Simpson says the boost for Trudeau from the mid-40s level he had two weeks ago is likely to be short-lived.

“I can’t remember the last time that foreign affairs was the ballot box question for Canadians,” he said.

“There are other things here at home that Canadians have told us are important to them, such as inflation, and that’s only going to get worse before it gets better. … So we’ll see where the economy goes, and how Canadians feel going forward.”

These are some of the findings of an Ipsos poll conducted between March 8 and 9, 2022, on behalf of Global News. For this survey, a sample of 1,001 Canadians aged 18+ was interviewed. Quotas and weighting were employed to ensure that the sample’s composition reflects that of the Canadian population according to census parameters. The precision of Ipsos online polls is measured using a credibility interval. In this case, the poll is accurate to within ± 3.5 percentage points, 19 times out of 20, had all Canadians aged 18+ been polled. The credibility interval will be wider among subsets of the population. All sample surveys and polls may be subject to other sources of error, including, but not limited to coverage error, and measurement error.