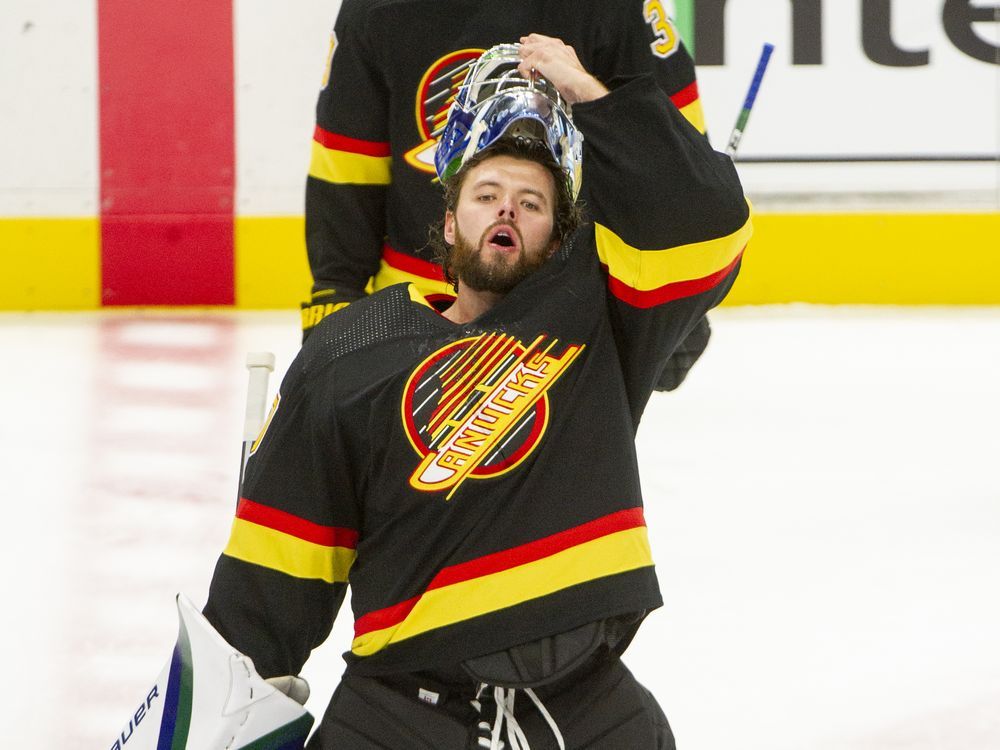 The person who plays goalie in a hockey game might as well be playing a different sport from the skaters trying to score on them.

“It’s a fair statement, and probably a statement that will be used a  lot more,” says Abbotsford Canucks goaltending coach Curtis Sanford.

“A goaltender has to find that game that works inside the team game. And I think having coaches that understand that and understand that role, and the responsibility that the goaltender plays within that, I think is very important.

“You’re trying to find a way to win the race against how skills coaches are trying to create offence and you have to be really cognizant of how your team plays in front of you and what exposures might be there. And likewise, with the other team, you’re trying to do that to the other teams, and break them down,” he added. “It’s a specialized race.”

That Abbotsford even has a full-time goalie coach is the perfect representative for how seriously the Vancouver Canucks take goaltending as an organization. This past season was Sanford’s first season as the Canucks’ full-time AHL goalie coach, after three seasons as a consultant who spent part of the season with the Canucks’ minor league netminders while also keeping an eye on prospects in the NCAA and junior hockey.

Abbotsford goalie Spencer Martin says that working with a full-time goalie coach was a key element in the success he saw this season, as he rose from the No. 5 goalie in the whole organization, desperate just to play an AHL game, into the presumptive NHL backup to Thatcher Demko for next season.

“It obviously helps you develop your game but also just keeps you extremely ready for, if you were to get that chance that I got, being called up and playing a game. You’re pretty much ready to go,” Martin said of having Sanford on hand, day in and day out.

In the first month or so in Abbotsford, Martin was very much the third wheel, with most observers’ eyes trained on younger, drafted prospects Mike DiPietro and Arturs Silovs.

A lot of practice time, not much game time. But the work paid off.

“(It) was really encouraging for me to have that pay off,” Martin said.

Canucks director of goaltending Ian Clark is known for pushing his goalies hard, both mentally and physically, driven by a belief that the athlete can be far more than he realizes. Having had Clark as a coach himself, Sanford is a true believer in Clark’s methods, though his own personal style is quite different from Clark’s.

“It’s been easy for me to keep on relaying those messages and making sure that ‘OK, we have a plan here, we’ve got to stick to this. We can’t just bail on it because we’re not having immediate success,’ ” Sanford explained. “Because every month through every season creates its own challenges and you have to be able to ride the waves but not jump off the surfboard because you don’t like what’s coming ahead.”

Sanford saw a lot of Martin in past seasons. The Canucks’ AHL affiliate was formerly in Utica, N.Y., and the Comets faced Martin’s Syracuse Crunch fairly often.

Not playing is never easy for a goalie, but it didn’t seem to fluster Martin, Sanford said.

“There’s always going to be the times where a guy will say ‘Hey, man, like, I’m a little frustrated here. I want to play. This is why we play the game, it’s to get in games and perform and play and be there for a team,’ ” Sanford said of Martin.

“It was nice that he was able to have those conversations with me. And I appreciate it. And it was just nice to be able to go through that process with him, build his game to a point where he took it on the ice. He applied the stuff that we had been working on for such a long period of time and put that into his game when he stepped on the ice and saw some success and was able to build on that success.”

Not every team in the NHL has taken goaltending as seriously as the Canucks have over the last two decades — and especially over the last 12 years.

It’s been 20 years since Clark was first hired as the Canucks’ goaltending consultant. His initial eight-year stint was technically only a part-time role, one that saw him spend about 20 days  a season in Vancouver itself, but also travelling to scout potential prospects, working with young goalies like Cory Schneider in Winnipeg and also sometimes hooking up with the team on the road.

But even as it was part-time, there’s little doubt of the degree of Clark’s influence. He helped guide Roberto Luongo during his first four seasons in Vancouver and helped develop Cory Schneider into a solid netminder.

Clark’s replacement, Rollie Melanson in 2010, was the first full-time goalie coach in team history, a role Clark took on when he returned to Vancouver in 2018 after stints with Modo in Sweden (2010-11) and then back in the NHL with Columbus (2011-18).

Melanson worked full time with the Canucks’ goalie in Vancouver until 2016.

Dan Cloutier had been the Canucks’ roving goalie consultant for the first few years in Utica, working with the Canucks’ goalies there like Jacob Markström in 2014-15.

In 2016-17 Melanson, wanting to be closer to his aging mother in New Brunswick, asked to swap roles with Cloutier. That was Demko’s first season as a pro.

The next season, Melanson left the organization altogether and Sanford was hired to be the team’s roving goaltending consultant, giving Demko plenty of more attention in what would be the final full AHL season for the Canucks’ goalie of the future.

Making Sanford the full-time AHL coach this past season was just the latest in a long thread of emphasis on developing goalies.

And Martin is just the latest in a solid line of goalies who have benefitted from this focus.

By Christmas, Martin had established himself as first choice in Abbotsford. And so when the NHL Canucks found themselves with both Thatcher Demko and Jaroslav Halák on the COVID-19 list, the call went out to Martin to play.

He made three starts in a week, standing on his head in every game, giving his team a chance to win. He made a good impression and then carried on with his strong play in Abbotsford.

It won him a two-year, one-way contract with the Canucks starting next season. He’ll average US $762,500 each season.

Martin subsequently had a late-season recall to the NHL after injuries again put Halák and Demko out of action.

The first call-up Martin was just looking to play well. The second time around, there was a bigger picture in play.

“Definitely given that it was really late in the season, I had a slightly different mindset where I’m starting to hopefully build my resume up so that I have a better chance to achieve my goal and make the team next year,” Martin said.

And, yes, after the season he’s had, Martin is a full-on Clark-Sanford acolyte.

“I’ve really felt like I bought in with Clarkie and the Canucks, what their plans are for me. So I’m just going day to day. I know that I need to have a really, really strong summer in preparing to go to battle for next camp.”

More news, fewer ads, faster load time: Get unlimited, ad-lite access to the Vancouver Sun, the Province, National Post and 13 other Canadian news sites for just $14/month or $140/year. Subscribe now through the Vancouver Sun or The Province.

Sign up to receive daily headline news from The Province, a division of Postmedia Network Inc.

Thanks for signing up!

A welcome email is on its way. If you don’t see it, please check your junk folder.

The next issue of The Province Headline News will soon be in your inbox.

We encountered an issue signing you up. Please try again