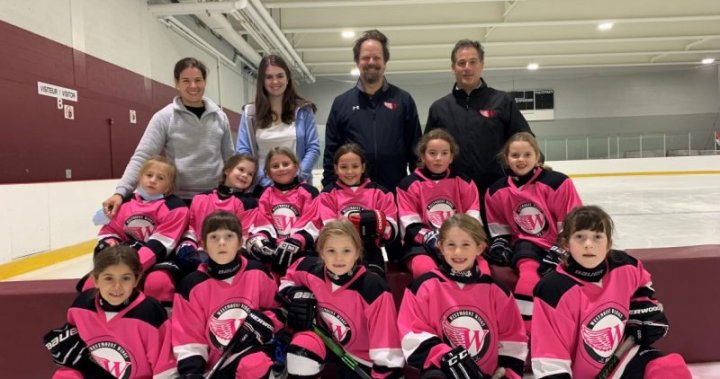 The city of Westmount, Que., introduced its first all-girls hockey team this season.

It’s the first time the Westmount Minor Hockey Association had enough girls sign up to make a complete team.

The girls range between seven and eight years old but many of them have been playing the sport for a couple of years on coed teams, the WMHA said.

“I think it’s better because the boys are a bit more rowdy and it’s easier,” said 7-year old Caroline San Gregorio of the new team.

Coach and parent Marie-Josée Blais thinks the all-girls team helps the players develop a true passion for the sport.

“The idea is to get them to really like the sport and have confidence because a lot of the issues with younger girls or older girls is to maintain or keep them in sport,” she says.

“I think my daughter would not have participated or would have had a harder time participating with boys and this gives her a bit more confidence.”

The Westmount Wings is the only all-girls team in its division and plays mostly all-boys teams from different parts of the city, but the girls seem to like it that way.

Saturday’s contest was the first official game. There is no score keeper but they did win their first two practice games.

The Westmount Hockey Association says the goal is to add an additional girls team every year.