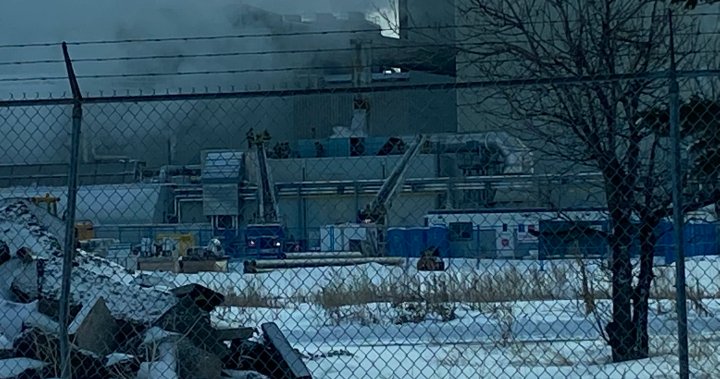 Extreme cold weather was no friend to Calgary firefighters working to knock down a three-alarm fire in the city’s southeast Alyth/Bonnybrook industrial area.

At around 12:20 p.m. on Wednesday, fire crews were called to the 3300 block of Bonnybrook Road S.E. for reports of a fire on the roof of an industrial complex. Crews arrived to find visible smoke and declared a working fire.

A second engine was called in half an hour later “for additional resources due to the extreme cold,” a city news release stated. Those extra crews allowed for regular warm-ups of firefighters working during the extreme cold warning declared by Environment and Climate Change Canada.

A third crew was called in because of the challenging location of the fire: under a heating unit and spreading inside spray foam insulation covering the roof in that area.

A crane was brought in to remove the heating unit so crews could have better access, and the fire was brought under control by 2:30 p.m.

A total of 19 people working in the building were successfully evacuated into a different, unaffected building within the same facility.

No injuries were reported and fire investigators are working to determine the cause of the fire.

1:43
‘We lost everything’: 11 people left homeless after fire at Calgary townhouse complex

‘We lost everything’: 11 people left homeless after fire at Calgary townhouse complex – Dec 21, 2021