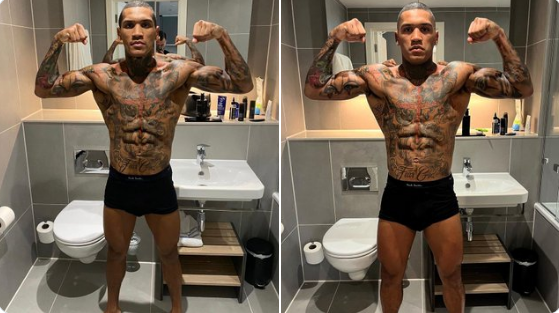 A boxer’s weight on the scales the day before a fight can be very misleading.

Whether they weigh in at the lightweight limit of 135lbs, the middleweight limit of 160lbs, or Conor Benn’s chosen division of welterweight at 147lbs, it is very rare that the fighter will actually be the same weight come fight night.

Boxers will often fight at a weight up to 20lbs lighter than their natural weight by severely dehydrating ahead of a weigh-in to gain a size advantage over their opponent.

That is the idea, but nowadays so many boxers do it that it is almost a necessary practice to stay competitive.

British welterweight power-puncher, Benn, took to his Instagram recently to show the drastic difference in his physique pre and post weigh-in.

He posted the images with the caption: “24 hours Apart. SWIPE to see the Rehydration.”

And the difference is obvious, as you can see below.

This is not uncommon, as we have previously heard Amir Khan talk about Canelo‘s crazy post weigh-in rehydration, when the Brit jumped up two divisions to take on the Mexican at a catchweight of 155 lbs.


Duran ‘had no heart’, beat up Stallone, Tyson idolised him and was dubbed ‘El Diablo’


Miller, who was banned for drugs, weighs in heavier than strong men Thor and Hall

“At the weigh-in he didn’t seem that big, but when I saw him in the corner I was thinking, ‘What am I doing here?’

As for Benn, he will not be jumping up in weight any time soon, as he has a number of ambitions in the welterweight division as he tears his way through the competition at 147lbs, with recent knockout wins over Chris Algieri and Chris Van Heerden.

Next up, ‘The Destroyer’ is in for a huge test, as Hearn recently told Boxing Social.

“There are three or four [names] which will get everybody frothing at the mouth. We’re negotiating with them at the moment,” he explained.

“It’s likely he will go straight into a big one next. I’m talking big, big. The stabilisers are off.”