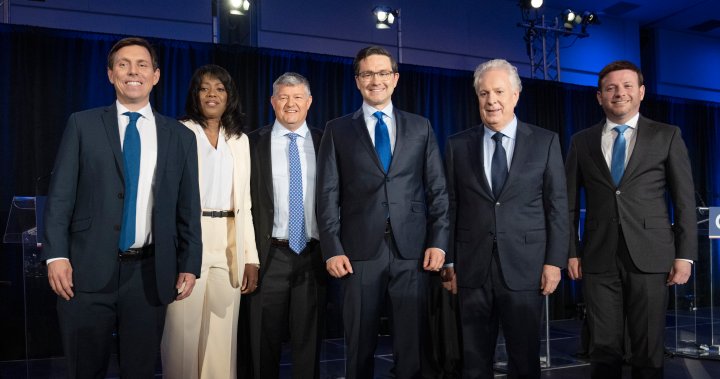 Candidates have until midnight to secure party memberships for their supporters to vote in the election for the next Conservative leader, who will replace Erin O’Toole.

The deadline marks a major milestone in the campaign and the start of a new phase in the race.

The party’s leadership election organizing committee said late last month it had already broken records for how many new members candidates have drawn in ahead of the June 3 cutoff.

“The party membership in the past two leadership races has been around 270,000 people, of which only about 60 per cent vote,” said veteran conservative campaigner Melanie Paradis, who has remained neutral in the race.

Leadership candidates have spent the last several months encouraging potential voters to sign up to vote. In the final days before the deadline, they’ve been frantically trying to get as many supporters into the voting pool as possible.

But not all memberships are created equal, at least when it comes to the final vote. Each riding is worth a certain number of points, so candidates have had to be strategic about where they grow their base.

“Get your membership so you can vote to take back control of your life,” Pierre Poilievre’s campaign said in an email to people who signed up for his mailing list, but hadn’t yet signed up for a party membership. “Buy the membership now, because after Friday it will be too late.”

Highlights from the Federal Conservative Leadership debate – May 12, 2022

Patrick Brown told supporters Thursday he had already met his membership goals, but still urged people on his mailing list to make sure their friends and family were signed up to vote.

“I urge you to forward this email to five people you know (more if you can!) urging them to take out a Conservative party membership to support my leadership campaign,” Brown’s campaign wrote to people on his mailing list.

Poilievre, Brown, Jean Charest, Leslyn Lewis, Scott Aitchison and Roman Baber’s names will all be on the ranked ballot in the fall.

Once they’ve signed up all the supporters they can to the party, and those memberships have been processed and verified, the camps will turn their attention to getting out the vote and attempt to persuade their opponents’ supporters to switch allegiances – or at least put their name second on the ballot.

Because of the ranked ballot system, voters’ second choice could play a major role in determining the next leader.

That’s what secured Erin O’Toole’s victory in the last leadership race when he picked up down-ballot support from Lewis and Derek Sloan’s voters.

Between the ranked ballots and the points system used on voting day, it can be difficult to get a sense of who is pulling ahead in the race.

“The algorithm is wild, and it’s why our leaderships are so hard to predict,” Paradis said.

She expects that once the final voter list is released, which could take several weeks, the camps will poll the potential voters on key issues. The results could inform the kinds of promises voters see in the final days of the race, as candidates try to get supporters to change camps.

The new leader will be named in Ottawa on Sept. 10.