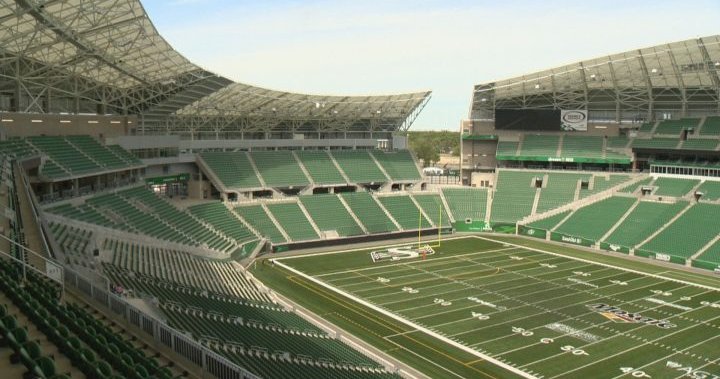 With Grey Cup 2022 in Regina just nine months away, the preparation for “the biggest party in Canada” has begun.

The theme of the festival – Bring it to heartland – was announced earlier this month and volunteers and staff are getting prepared for the major event.

Grey Cup Festival 2022 will be held at the same location as the Grey Cup — at Regina Exhibition Association Limited (REAL) campus — from Nov. 15 to 20.

Grey Cup Festival theme revealed as ‘Bring it to the Heartland’

CFL commissioner Randy Ambrosie joined Saskatchewan and Regina officials, as well as those involved with the Saskatchewan Roughriders and the festival organizing committee at Mosaic Stadium on Thursday to share more details about the festival.

“Saskatchewan is the heartland of Canada, and our province is the heartbeat of the Canadian Football League. We invite everyone to experience that,” Saskatchewan Roughrider CEO Craig Reynolds said at the news conference.

Reynolds said “the REAL district will come alive” with events planned leading up to the Grey Cup game on Nov. 20.

Mosaic Village will be home to the indoor Grey Cup Festival with team parties including the “biggest Riderville party yet.”

Festival sponsor SaskPower will also be hosting a family-friendly and youth-focused fair.

Outside, the NextGen Street Festival will be home to 40,000 square feet of fun activities for the whole family to enjoy.

“This is going to be full of activities for the young and the young at heart including big activations like the tube slide presented by SaskPower,” Reynolds said.

Reynolds even challenged Regina Mayor Sandra Masters to a speed trial on the slide.

The Harvard Media Community Stage at Confederation Park will host local musicians, entertainers and community programming throughout the festival week.

The Capital Auto outdoor tailgate is expecting to see thousands of fans on Grey Cup Sunday for a ticketed event, featuring live entertainment before kickoff.

REAL VP of corporate development Sandra Jackle said the last 22 months have been hard for those in the event business due to the COVID-19 pandemic delaying or cancelling many major events.

“I wondered when we would ever be able to welcome people back for a huge party and we know a Grey Cup festival is a huge party,” Jackle said.

“People drink hard, they party hard and they play even harder, and I have no doubt we’ll blow it out of the water from 2013.”

Jackle added one benefit to this year’s festival, which she declared “the biggest party in Canada,” is that it’s all being hosted at REAL campus, meaning attendees won’t have to worry about catching a ride to other events.

“We want everyone to have a great time this year after what we’ve been through. We deserve to have one heck of a party and the Grey Cup is the perfect place to let loose responsibly.”

“We have all the elements to put together a terrific Grey Cup. We have the fans — the most passionate in the country (and) we have the Riders, the flagship franchise of the CFL,” Makowsky said.

“We have the REAL district, one of the largest entertainment complexes in the country — an organization with a solid track record of managing big events (and) we have the city of Regina —growing, vibrant and friendly. And most importantly we have the people.”

Makowsky, as well as other speakers, also took the time to thank volunteers and sponsors who make the festival possible.

To incorporate the entire province in Grey Cup festivities, a Richardson Pioneer Community Celebration Tour will take place featuring six communities that will be awarded $25,000 for assets or infrastructure aligned with youth, health and wellness and active living needed in their town.

In addition to the cash prize, these communities will also receive support hosting a mini Grey Cup Festival to help with their fundraising efforts.

Ambrosie thanked the Saskatchewan government and City of Regina for all that they do for the Riders and Grey Cup festivities.

He also thanked health-care workers for their support over the last two years.

“I’m grateful to the people of Saskatchewan who understand hospitality and Prairie values and all of the qualities that make Grey Cup so special,” Ambrosie said.

“As it has been said, (Grey Cup) is a place and a way to bring Canadians together that is unmatched to anything else that goes on in our great country.”

Further details will be provided in the future about Grey Cup events in other cities, like Saskatoon.

Reynolds said more details will also be provided about how the festival will be technology-focused with digital ticketing and other activities expected to be announced.

Single game tickets will go on sale on June 14 but Reynolds said the best way to secure seats to the big game is to be Roughriders season ticket holder.