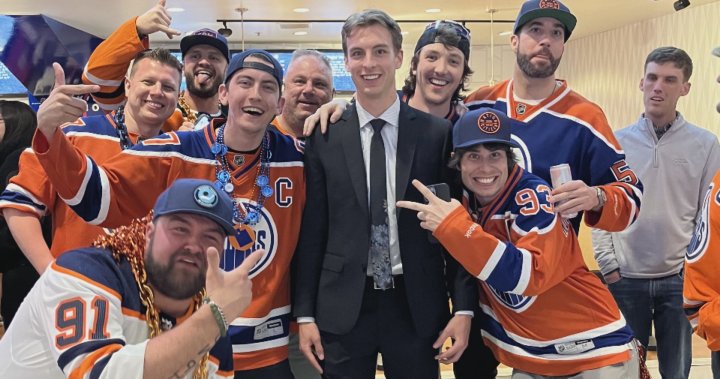 Edmonton Oilers fans couldn’t get enough of Friday’s big 8-2 win over the Kings, especially those who watched the game in Los Angeles.

“(It was) such a cool experience to be able to witness a performance like that on the road,” Jay Downton, an Oilers fan in L.A., said.

Downton is one of more than 40 Oilersnation fans who flew south of the border to catch games three and four in person.

“We’re staying just outside of Crypto.com Arena at L.A Live, so we are right in the mix of things here,” Downton said.

He added they aren’t the only ones representing orange and blue in sunny California.

“The beauty is you walk down the streets and you see someone with an Oilers hat on or with a hoodie or whatever in the mornings and you’re immediately best friends because we’re all travelling down as a giant family,” Downton said.

“I am at the happiest place on hearth after a huge 8-2 Oilers win… Disneyland of course, wearing my Oilers jersey and showing our Oilers pride after that big win,” Sheetz said.

He too said there’s something special about being an Oilers fan in enemy territory.

“It’s kind of like a brotherhood or sisterhood when you’re on the road and everyone becomes your best friend if they are wearing the Oilers colours,” Sheetz said.

Sheetz added that even those not sporting the same colours were very welcoming.

“They appreciated that we made the trip all the way from Edmonton… but they were like, ‘man you’ve got a great team, you got the best player in the world and we’re probably not going to beat you, and if we don’t, we’d rather see you win than Calgary,’” Sheetz said.

While these fans continue to represent their team, they’re both optimistic and excited for the next game.

“I don’t want to get too far ahead of myself, but you know… feeling really good about what Game 4’s outcome is going to be,” Downton said.