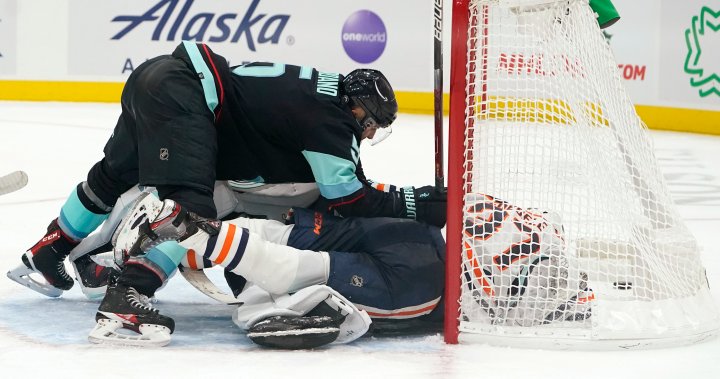 Despite playing with a roster reduced by injuries and COVID, the Edmonton Oilers scored a 5-3 road win over the Seattle Kraken Saturday night.

The Kraken scored on their first shot when Ryan Donato’s long wrister eluded Stuart Skinner 4:18 into the game. Less than five minutes later, Jared McCann made it 2-0. The Oilers responded when Evan Bouchard blasted a point shot past Chris Driedger for his fifth. With the Oilers on a power play, Skinner denied Brandon Tanev on a breakaway. Seconds later, Warren Foegele fired in a rebound to make it 2-2.

Colton Sceviour flipped in his second of the season to give the Oilers the lead with 7:08 left in the second. Carson Soucy pulled the Kraken even before the end of the session.

In third, the puck bounced off Foegele and into the net. The goal was initially disallowed because of goalie interference. The Oilers challenged, and video review showed that Mark Giordano pushed Foegele into Driedger. That put Edmonton up 4-3 with 11:06 left. Connor McDavid put it away with an empty netter.

Leon Draisaitl had three assists. Skinner made 14 saves to improve his record to 4-5.

Cooper Marody and Seth Griffith were in the lineup after being called up from Bakersfield Friday night. Marody assisted on Bouchard’s goal for his first NHL point. Griffith helped create a turnover leading to Sceviour’s goal.