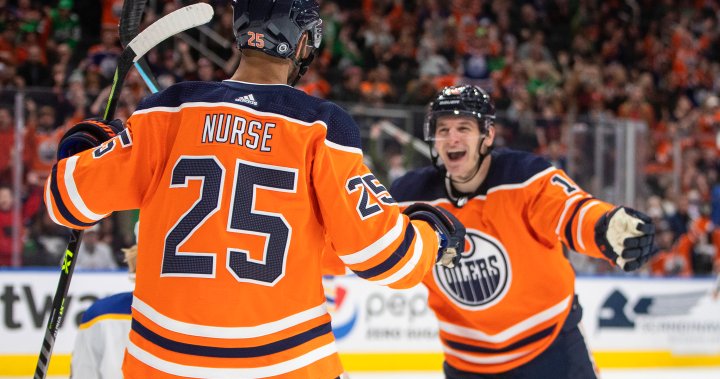 The Edmonton Oilers won their fourth game in a row with a convincing 6-1 victory over the Buffalo Sabres Thursday night at Rogers Place.

The Oilers played a strong first period and took the lead when Kailer Yamamoto fired in his 15th goal of the season 7:21 into the game. Yamamoto has scored in four straight games. Later, Connor McDavid jammed in a puck from the side of the net to make it 2-0.

Oilers forward Leon Draisaitl notched his 40th goal of the season in the second. He extended to corral his own rebound, then stuffed the puck behind Sabres goaltender Craig Anderson.

The Oilers kept the pressure on and made it 4-0 on Darnell Nurse’s seventh exactly five minutes later.

The Sabres got on the board early in the third on a long one-timer by Victor Olofsson. Devin Shore came right back for Edmonton, bagging his fifth on a shorthanded breakaway.

McDavid didn’t play the final 5:41 after taking a high stick from Buffalo forward Vinnie Hinostroza, who was slapped with a double-minor on the play. Oilers defenceman Tyson Barrie scored on the power play to round out the scoring.

Edmonton netminder Mike Smith made 27 saves for his sixth win of the season.