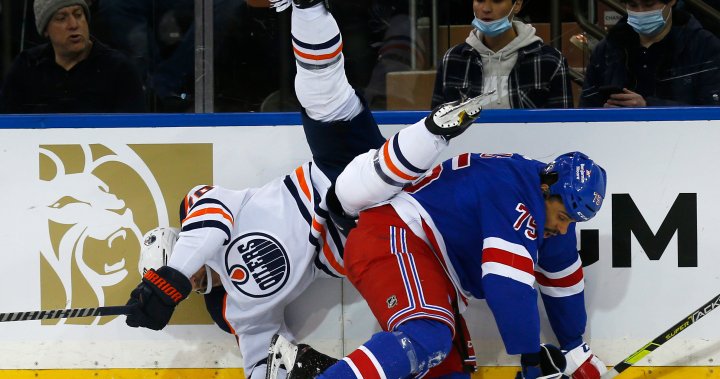 The Edmonton Oilers’ struggles continued Monday night, suffering a 4-1 loss on the road against the New York Rangers.

For the 20th time in their last 24 games, the Oilers allowed the first goal of the game. Five-and-a-half minutes in, Oilers goaltender Mikko Koskinen misplayed the puck behind the net leading to a goal by Rangers forward Alexis Lafreniere.

The Rangers added to the lead early in the second when Lafreniere set up Barclay Goodrow for his seventh goal of the season.

After the Rangers missed a couple of golden chances to extend their lead, Oilers forward Tyler Benson set up Ryan McLeod for his fourth with 6:00 left in the second.

In the third, Rangers forward Chris Krieder tipped a point shot on a power play. The puck hit Koskinen in the chest but then dropped down, trickled through his legs and into the net. With less than six minutes to go, New York forward Ryan Strome’s pass deflected in off Edmonton defenceman Tyson Barrie to make it 4-1.

The Oilers are 2-8-2 in their last 12 games and 18-13-2 for the season season. They’ll visit the Toronto Maple Leafs on Wednesday.