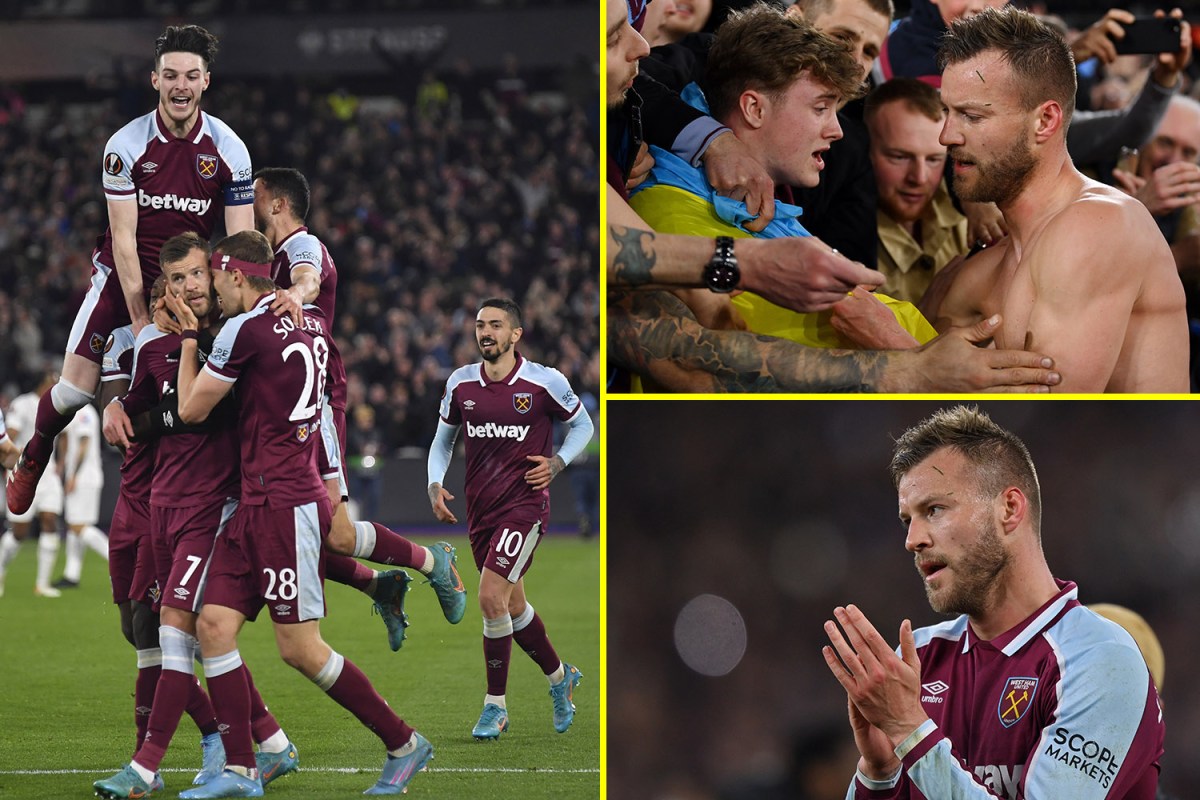 The tears were flowing at the London Stadium on Thursday night in what was a momentous night in West Ham’s history.

It was a story you could not write as Andriy Yarmolenko came off the bench to score an extra-time winner to send the Hammers through to the last-eight of the Europa League.

The Ukrainian took compassionate leave from West Ham in recent weeks amid his homeland’s war with Russia.

He only returned to the team at the weekend to score a match-defining goal against Aston Villa, but this winner to seal a 2-1 aggregate win over Sevilla will go down in the club’s history books.

The 32-year-old the proceeded to give his shirt to a fan who was holding a Ukraine flag in a touching moment after the final whistle.

Declan Rice gave an insight into how Yarmolenko was feeling after the final whistle.

“I’ve just seen him in the kit room and he was a little bit emotional,” Rice told BT Sport. “He was away from the lads to take it in.

“From what he’s been through recently, to perform how he’s done against Villa and tonight is a credit to him.

“He’s been through so much. Us as players, we are there for him and he deserves this.

“He’s stepped up and is a big player for us. I’m delighted for him.”

The London Stadium was rocking for one of the biggest nights the club have had in decades.

It is the first time West Ham have reached a European quarter-final in 41 years and Rice hailed the atmosphere at their home stadium.

“It was so, so special tonight,” Rice added. “This club, this stadium, the fans, the players, we deserve these big European nights.

“We stepped up tonight, we were 1-0 down and knew what such a good team Sevilla were.

“We knew with our fans and the quality we had, we could do it.”

David Moyes has done a fantastic job with the Hammers, leading them to top four challengers and a fantastic European adventure.

Former Tottenham midfielder Jamie O’Hara admitted that West Ham deserved a big night like this, saying on the Sports Bar: “I have to say, I’m proud of West Ham.

“That shows massive, massive heart to get through a tie like that being 1-0 down.

“To take them back to your home ground and get a result, I’m watching Declan Rice and you can’t take the smile off his face.

“It’s a massive night for West Ham and they’ve been hurting for years and waiting for moments like this.

“They deserve that tonight. The fans deserve it, the players deserve it and David Moyes deserves it.”

West Ham made it the second British side through to the last-eight of the Europa League with Rangers also making it through.

Gers fan Mal was emotional on The Sports Bar after seeing Yarmolenko score the winner to join his side in the next round.

He said: “I was crying earlier with Rangers and then to see Yarmolenko score. Congratulations to David Moyes and West Ham, I’m absolutely over the moon.

“The guy going into the crowd and giving his top to the guy with the Ukrainian flag was very emotional.

“Listen, congratulations West Ham and with Rangers I’m absolutely over the moon. It would be a great Battle of Britain, but we’d love Barca as well.

“Tonight has been an emotional night for everybody and fair play to West Ham and David Moyes.”