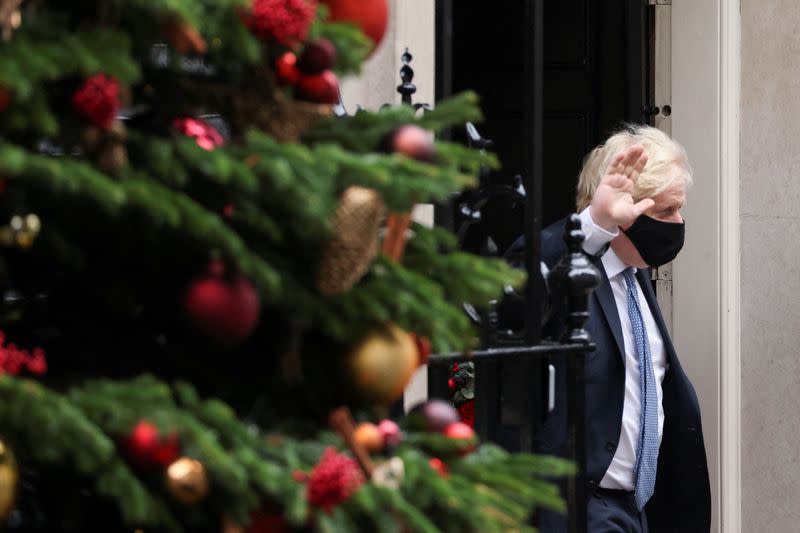 LONDON (Reuters) – British Prime Minister Boris Johnson is facing increasing anger among his lawmakers, many of whom believe he is squandering his Conservative Party’s successes by self-inflicted missteps and gaffes.

Johnson, who helped the Conservatives win a large majority in a 2019 election, offered his “heartfelt apologies” https://www.reuters.com/world/uk/party-over-uk-pm-johnson-faces-crunch-day-parliament-2022-01-12 on Wednesday for attending a “bring your own booze” gathering at his official residence during the country’s first coronavirus lockdown, as opponents said he must resign.

It follows a series of controversies and missteps in recent months, including a major rebellion among his lawmakers over COVID-19 restrictions, the loss of a long-held parliamentary seat, and questions over the funding of a pricey refurbishment of his apartment.

Several Conservative lawmakers say some colleagues have written letters of no confidence in Johnson, the first step required to seek a leadership challenge.

Below is an explanation of how Johnson could face such a challenge under the governing Conservative Party’s rules:

– What needs to happen for there to be a leadership contest?

A leadership challenge can be triggered if 15% of Conservative members of parliament (MPs) write letters demanding a confidence vote to the chairman of the party’s “1922 Committee”, which represents lawmakers who have no government jobs.

The Conservatives have 360 MPs, so 54 would need to write such letters for a confidence vote to be called.

– Could this happen to Johnson?

Several Conservative lawmakers have been outspoken in their unhappiness with Johnson, and at least one, Roger Gale, has confirmed publicly that he has written to 1922 Committee chairman Graham Brady.

The letters are confidential, so Brady is the only person who knows how many MPs have actually written them.

– What would happen during a confidence vote?

All Conservative MPs could vote for or against their leader. If Johnson wins he remains in office and cannot be challenged again for 12 months. If he loses, he must resign and is barred from standing in the leadership election that follows.

– How quickly can a no-confidence vote take place?

Under Conservative rules, the 1922 Committee chairman in consultation with the party leader decides the date of a vote, to be held as soon as possible.

When Johnson’s predecessor Theresa May faced a confidence vote in December 2018, which she went on to win, it was held on the same day the 1922 Committee chairman announced he had received enough letters to trigger the vote.

– What would happen if Johnson lost a confidence vote?

If Johnson lost, there would be a leadership contest to decide his replacement. However, a general election would not automatically be triggered, and his replacement would become prime minister.

If several candidates come forward, a secret vote is held among Conservative MPs to whittle down the field. The candidate with the fewest votes is removed and another ballot among Conservative lawmakers is held. The process is repeated until two candidates remain, with votes held several days apart on Tuesdays and Thursdays.

The final two candidates are then put to a postal ballot of the wider Conservative Party membership, with the winner named the new leader. Voters need to have been party members for more than three months.

– Who could replace Johnson?

The two MPs considered frontrunners to replace Johnson are his finance minister Rishi Sunak, who has had a high profile role in publicising the government’s support for the economy during the COVID-19 pandemic, and foreign minister Liz Truss, who is popular among grassroots party members.