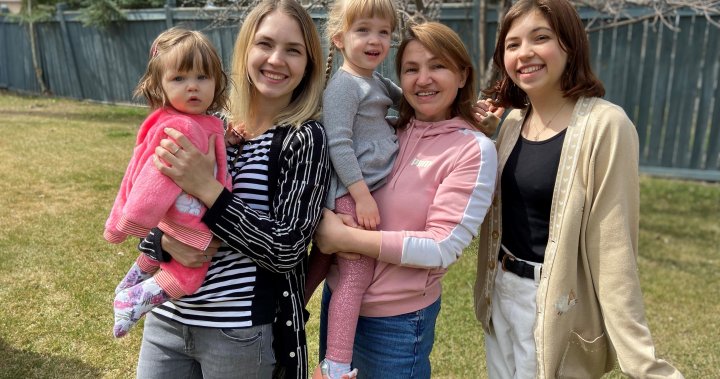 Ksenia Smyrnova and her family are relieved to now call Edmonton home.

Not long ago, she was on the run with her mom, sister and two kids, escaping Russian attacks in their hometown of Kharkiv near the western border of Ukraine.

“We finally decided that we have to save our kids and run away from the country,” said Smyrnova.

Wanting to avoid the mass of refugees fleeing to Poland, the family opted instead to go through Romania.

“We applied for a visa to Canada because we decided that would be the safest country for us,” Smyrnova said.

Having to leave her husband behind, she was now the one having to support her family.

Desperate to find work, she searched online and came across a job opening in her field posted by the owner of Edmonton-based SolarNinjas Energy Solutions Michael Thomas.

“I got so many job applications back from incredible professional people who were just amazing,” Thomas said.

Among the list of applicants was Smyrnova, but Thomas said he had already hired someone else from Ukraine for the position.

“Ksenia impressed me so much with her application when she was looking for work that it kind of inspired me to want to help all of the people looking for work,” he said.

Thomas reached out to friends and was able to get Smyrnova a job with Stantec Engineering. But the help didn’t stop there.

“We were able to find employment and housing with full levels of support and also fly them for free so that these people from Ukraine are not spending their life savings just on the airplane ticket,” Thomas said.

From war torn-Ukraine to Edmonton. Smyrnova said being given the opportunity to start this new life, thanks to the generosity of strangers, is more than she could have ever hoped for.

“It’s like a fairytale, everyone helps, nobody wants anything in return,” she said.

“I just can’t believe this.”

Thomas has since continued to help many more Ukrainians who are both trying to get to Canada and others who have already arrived.