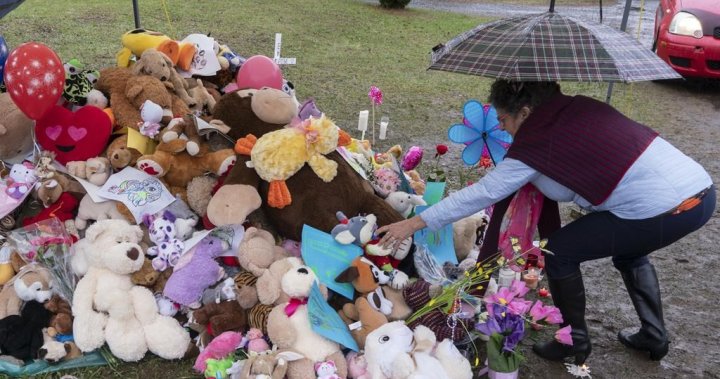 A Quebec Superior Court judge Friday sentenced the father of a girl who was murdered by her stepmother in April 2019 to four years in prison for his role in events leading to her death.

The man, who used adhesive tape to restrain his seven-year-old daughter in their Granby, Que., home several hours before her death, pleaded guilty to a single charge of forcible confinement on Dec. 13, and in exchange, the Crown dropped three other charges, including criminal negligence causing death.

The girl’s biological mother spoke directly to the 32-year-old man during a sentencing hearing Friday, asking him why he took custody of their daughter just to neglect the girl.

On Dec. 17, the girl’s stepmother was sentenced to life in prison with no chance of parole for 13 years after she was convicted of second-degree murder.

The case shocked Quebec and led to an inquiry into the failings of the province’s child-welfare services.

The girl, and those involved in her death, cannot be named in order to protect the identities of other children who lived in the home where the murder took place.

The biological mother, who left the courtroom in tears before returning to the court to deliver an impact statement, said the girl had been happy living with her grandmother before youth protection authorities gave custody to the father.

“Why did you want to take her away, if it was to hurt her, neglect her, take her away from a place where people really loved her?” the woman asked.

In a letter read by a Crown lawyer, the man’s sister said she no longer considers him a brother.