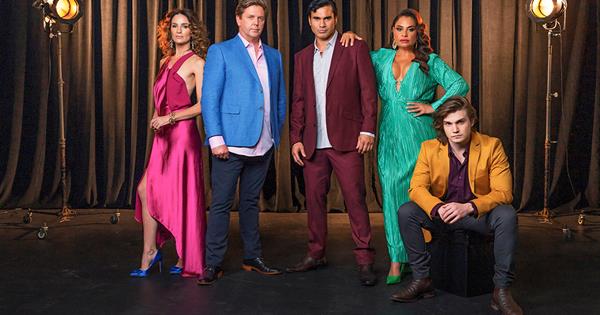 The Shortland Street cast photo is an almost-annual ritual dating back to the iconic medical drama’s very first year in 1992. Back then, it was simply a matter of getting all the actors in costume, putting them in one room on set and lining them up.

But now, with a larger cast and more hectic schedules, it’s a much more complex process! This year, which marks Shorty‘s milestone 30th birthday, the shoot was done over four days, with a talented team of hair and makeup artists, plus head stylist Jaime Randell – yep, she’s Dancing With The Stars NZ host Clint’s wife!

Unfortunately, actress Jennifer Ludlam, who plays hospital florist Leanne Black-Johnson, was out of town on annual leave at the time, but she’ll be added into the photos with a little bit of digital magic at a later date. Yay, technology!

Here, we go behind the scenes in Ferndale to ask some of our favourite stars about the fabulous photoshoot and how they feel about the TVNZ 2 soap’s historic anniversary…

SCOTT SMART
plays ED doctor Marty Walker
“I feel honoured to be a part of Shortland Street during its 30-year celebration – not just because of the incredible legacy of the show, but also because of the current cast and crew making the show under these exceptional circumstances. It’s hard work and passion that holds this show together, and I feel honoured to stand alongside them all. As for the cast photo, we had a one-week-old baby at home when I did this shoot, so I didn’t know the difference between day and night. It was quite a change of pace to be so snappily dressed all of a sudden. Great fun!”

REUBEN MILNER
plays junior doctor Jack Hannah
“I don’t know a life before Shorty. I mean, it’s older than I am, so I am blessed to be a part of this history-making TV moment! The shoot was done over a series of days and I was in the first group to be photographed, so I had no idea what to expect, but we were having so much fun, we completely lost track of time. Lot of laughs and fun was had, especially with the balloons!”

MARIANNE INFANTE
plays acting director of nursing Madonna Diaz
“Being a part of Shorty‘s history-making 30th anniversary is a huge honour, and for there to be a proud Filipino nurse embedded in the core whānau is exhilarating and historical on its own. It’s a great indication of positive change. The cast photo was an absolute joy to shoot and I was extremely excited to be a part of it. Now I feel like I really have landed here at Shortland Street. Theo [Dāvid, who plays paramedic Viliami To’a] was the best co-star to pose alongside and ride this journey with.”

NICOLE WHIPPY
plays nurse practitioner Cece King
“This is so iconic. Filming during a global pandemic on New Zealand’s longest-running soap is a time in my acting career I will never forget – I’ve got so many stories to tell the grandkids. But I’m terrible with cast photos. I’ve done so many over the years and I hate them. Hello, I’m an actor, not a model! But I have to say, playing dress-up was fun, especially with our incredible stylist Jaimie. I loved posing with Katherine [Kennard, who plays Vivienne Erwell] and Ben [Mitchell, aka TK Samuels], who obviously both have modelling experience. I mean, check out their blue steels! And Henry [Rolleston, who stars as Louis King] is giving serious Edward Cullen vampire vibes. Meanwhile, Mike Galvin [Chris Warner] and I just like to keep it real!”