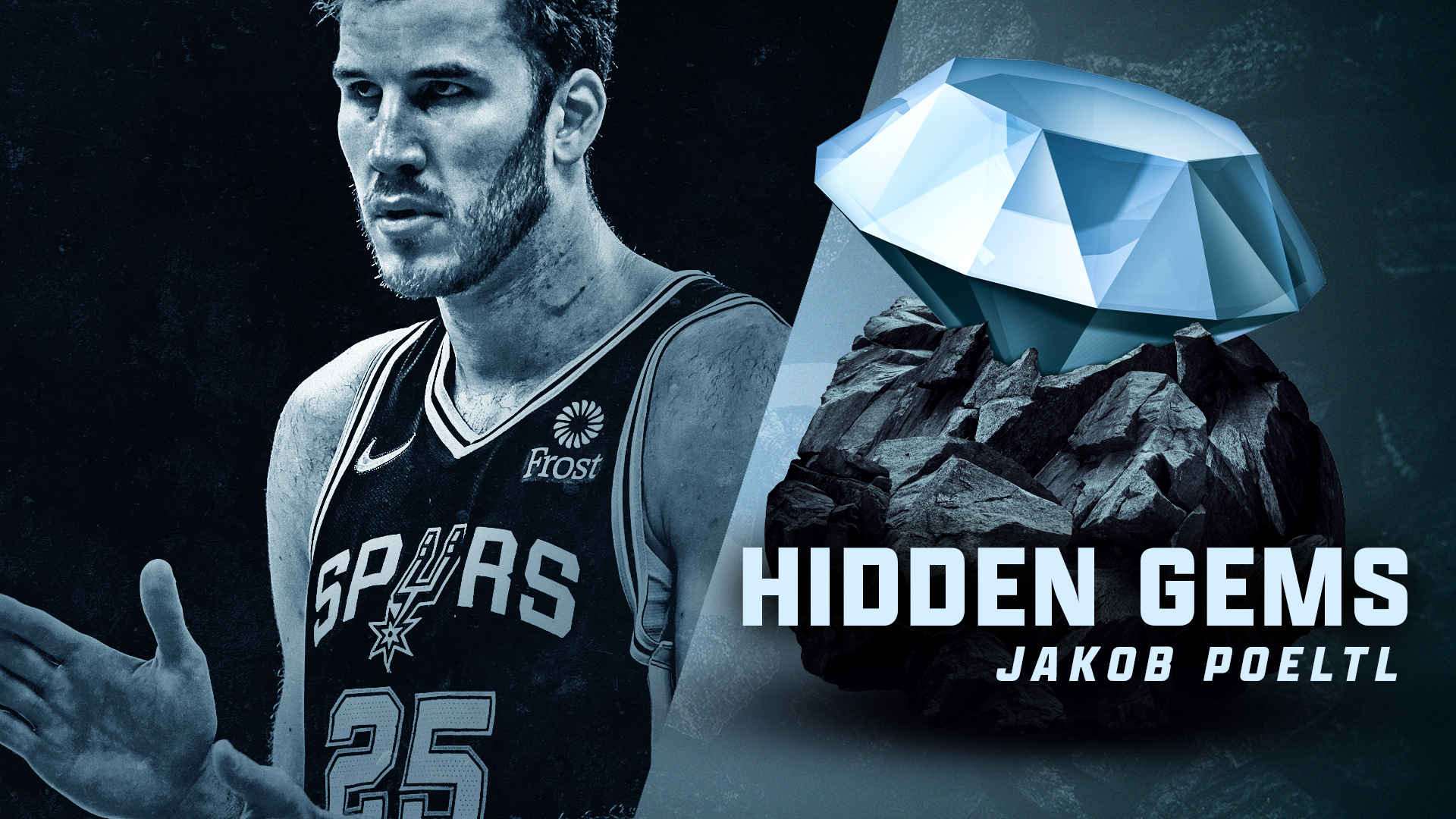 Welcome to the first edition of Hidden Gems! This will be a regular Tuesday column where I’ll profile good under-the-radar players. Every fan wants to trade for Kevin Durant or Giannis Antetokounmpo in exchange for John Wall and a second-round pick. Those fake trades aren’t going to happen, but these guys are good and gettable.

You won’t see All-Stars featured here. Instead, these are solid players in the top 40-125 range. They’re relatively unknown to casual fans but are fan favorites for those who watch them regularly. To kick off the inaugural column, here’s Spurs starting center Jakob Poeltl.

Who is Jakob Poeltl?

He’s the guy who had the lowest billing in the Kawhi Leonard-to-the-Raptors trade. He’s the owner of the worst nickname (Jake Puddle) in the league. He’s a 7-1 giant hiding in plain sight to the 28 fan bases that haven’t experienced him playing for their team, and maybe the most Googled player in the arena when they catch him for the first time.

He’s the early Bulls version of Joakim Noah if Noah played in the modern NBA and had an even worse jump shot. He’s Rudy Gobert with 25 percent less rim protection but 200 percent better mobility. In short, there is only one Jakob Poeltl, which makes him fun to watch. He’s the best NBA center who nobody’s talking about, the guy who Nuggets head coach Michael Malone called “one of the most underrated players in the league.”

After playing behind Jonas Valanciunas in Toronto and LaMarcus Aldridge in San Antonio for the first 4 1/2 years of his career, Poeltl finally got a chance to show what he could do as a starting center midway through last season. He’s continued to build on some signs of success, and he’s on the path to getting All-Defensive team buzz some time in the near future.

Any evaluation of Poeltl’s value on the floor has to start with that defense. Gobert is on his own level, but Poeltl is in the mix for the next-best rim protector in the league. He is a master at spending as much time as possible in or near the paint, avoiding defensive three-second violations by tapping both toes outside of the paint before gearing up to block a drive.

Poeltl blocks shots like somebody cursed out his mother. He has great timing on his jumps and avoids committing fouls. Part of that leaping ability might be genetics — both his parents were members of the Austrian national volleyball team. He had one of the nastiest blocks of the year earlier this season against Anthony Davis.

What really differentiates Poeltl from his shot-blocking peers is that he’s able to move much better than most of them on the perimeter. Not only does this allow him to cover a lot of distance on his blocks, but he also doesn’t get cooked quite as often by quick guards. He thus manages to avoid every player’s nightmare: becoming the subject matter for a viral bad defense meme:

Poeltl is also strong as a communicator on the floor. He’s constantly pointing his finger to call out coverages, like a younger brother tattling on his siblings.

Offensively, Poeltl’s weaknesses are glaring and obvious. He’s capable of airballing both free throws on a trip to the line, and he’s been a target for intentional fouls. You will never see him taking a 3-pointer. This is the farthest-out shot that he’s attempted this season:

That push shot that only a mother could love is surprisingly passable, but his value is always going to be limited by his lack of an outside shot past 15 feet and serious free throw woes. Still, Poeltl still brings some overall value as an offensive player.

Poeltl is also great in pick-and-roll situations. He’s hit 60 percent of his shots overall this season and is a very solid 71 percent at the rim, per Cleaning the Glass. He lays wood on screens, and he is second only to Gobert in how often his screen assist numbers get mentioned to people who stopped listening 10 seconds ago. He’s also proficient in one of my favorite big-man moves, the Gortat, in which he clears a path for guards like a Pro Bowl fullback. When he does get those dump-off passes, he shows some clever craft and footwork on his finishes at the rim.

MORE: Why the Bulls could crash the NBA’s title contender party

Poeltl also has some nice passing chops. He’s capable of throwing up eephus pitches over the defense to cutters or zipping them one-handed off a live dribble.

Unless you’ve restocked on Blue Bell ice cream from your local H-E-B recently, you probably haven’t been watching much of Poeltl. The Spurs only play once all season on ESPN, on Jan. 26 against the Grizzlies.

Poeltl will probably never make an All-Star team. But he’s a very solid starting center who is set to be a free agent in two years. He could help a ton of contending teams if he’s traded before then, or lock down that position with the Spurs if they choose to pay him. Keep your eye on him — he’s hard to miss once you start watching.