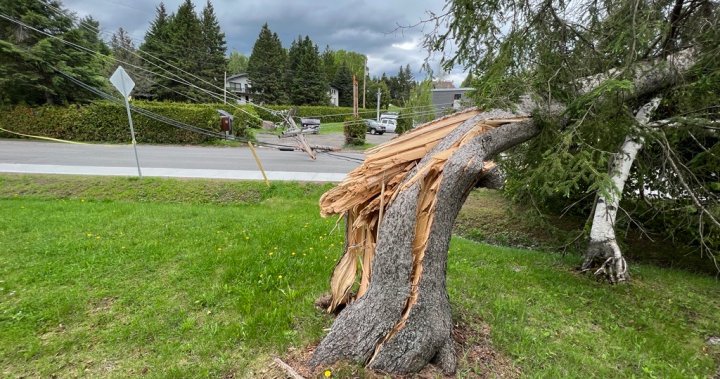 A destructive and deadly spring storm over the weekend has kept thousands of Quebecers in the dark for days.

Hydro-Québec reports about 130,000 households across the southern half of the province are still without power as of Tuesday morning.

“The most affected regions remain the Laurentians, Lanaudière and Outaouais,” the Crown corporation wrote on social media. “Major challenges remain to restore service to customers without power.”

Hydro-Québec said it deployed about 700 employees to restore power to customers and that 76 per cent of affected clients are back on the grid.

Power outages continue after deadly storm that swept through parts of Ontario, Quebec

The lights should be back on for the majority of affected homes by the end of the day.

“However, we estimate that after tomorrow there will be around 30,000 customers for whom the work could take longer.”

The storm swept through Quebec and Ontario on Saturday, killing at least 10 people. Heavy rain and powerful winds took down hydro poles, uprooted trees and damaged homes in both provinces.

At the peak, there were 550,000 homes without power in Quebec. The outages stretched from Gatineau to as far as Quebec City.

2:08
Clean up underway after severe storm passes through Quebec

Clean up underway after severe storm passes through Quebec

With the cleanup still underway, Hydro-Québec says its crews are working around the clock to restore power.

“We thank you for your patience and our teams will work day and night until the last client is reconnected,” the organization said.