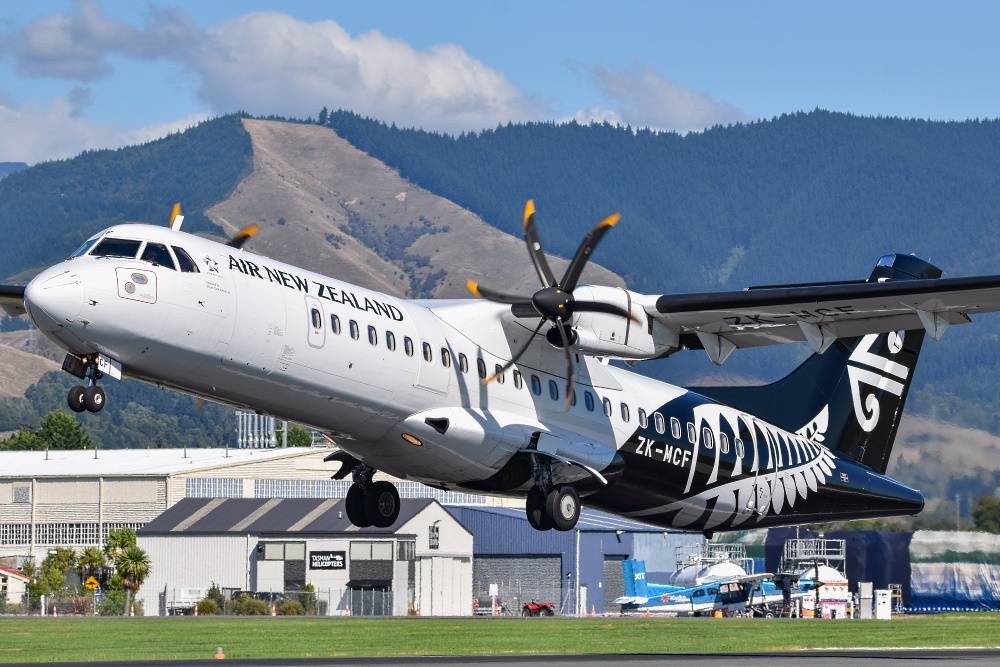 Californian tech company Universal Hydrogen (UH) has developed a conversion kit for the fuelling of regional airliners with hydrogen and is working with airlines using ATR and Dash 8 aircraft.

Icelandair and US charter outfit Connect airlines have demonstrated interest in the project by this month’s signing of Green Hydrogen Agreement letters of intent for fitting out Q300 and ATR-72 aircraft, respectively.

Connect Airlines chief executive John Thomas said the carrier was “committed to being the world’s first zero-emissions airline, and the only way to accomplish this in the near term is with hydrogen.”

The implications could be considerable for operators of ATR and Dash 8 aircraft that wish to lower their emissions. This includes Air New Zealand, operating a fleet of 29 ATR-72 600s and 23 Q300s.

The installation involves the replacement of turboprop engines with a fuel-cell electric powertrain being developed by MagniX Aero, which supplied the powerplant for Vancouver-based Harbour Air’s DHC-2 Beaver, the world’s first fully electrically powered passenger plane to see service.

The conversion requires hydrogen fuel cells to be installed in each aircraft’s rear fuselage, and the removal of the rearmost rows of passenger seating. This reduces the Q300’s capacity from 50 to 40 seats, but UH believes the lost revenue will not negatively affect the airlines’ bottom lines because of improved efficiencies.

UH is proposing lightweight hydrogen storage modules that can be easily transported using existing infrastructure and integrated into existing facilities without an expensive overhaul.

“We see the partnership with Universal Hydrogen as the fastest path to zero-emission operations because they offer both an affordable retrofit solution for the existing airplane fleet as well as a pragmatic approach to delivering hydrogen to any airport within our existing network,” Thomas said.

In line with the 2016 Paris Accords, ICAO’s Carbon Offsetting and Reduction Scheme for International Aviation (CORSIA) offers emissions reduction programmes with the target of reducing increases by 2.5% by 2050.

This and public pressure have spurred airlines, including Air New Zealand, into planning the lofty goal of achieving net-zero emissions targets by 2050. The airline has also proposed the implementation of a sustainable aviation fuel production programme in New Zealand.

Q300: Hydrogen conversion would require the replacement of rear seats for the installation of cells. Photo: Grant Newman.

With a fleet of turboprop regional airliners that exceeds the number of pure jets (by one aircraft) as of last April, achieving its emissions reduction ambitions would receive a considerable boost through hydrogen fuel. That is, of course, if UH and MagniX honour their commitments and the technology is proven viable.

The biggest hurdle comes from the gas itself. Hydrogen is highly flammable. Facilities for its production and storage require large-scale investment. Hydrogen production is costly but is not new technology, as several countries developed airship programmes that relied on hydrogen as their primary source of lifting gas in the early 20th century,

Public perception of hydrogen as a power source could be lukewarm, with echoes of the 1937 Hindenburg disaster lingering in the collective conscience. Storage onboard aircraft requires careful temperature and pressure management, which warrants fuselage storage in cylindrical containers rather than inside airliners’ wet wings.

This adds weight and complexity, not to mention doubt expressed by passengers about sharing the cabin with volatile hydrogen tanks.

There are advantages to hydrogen, however; it’ s a more efficient energy source than conventional fuels. Since it has specific energy 2.8 times higher than kerosene-based gas turbine fuel, a hydrogen-fuelled aircraft needs 2.8 times less fuel weight to achieve the same range.