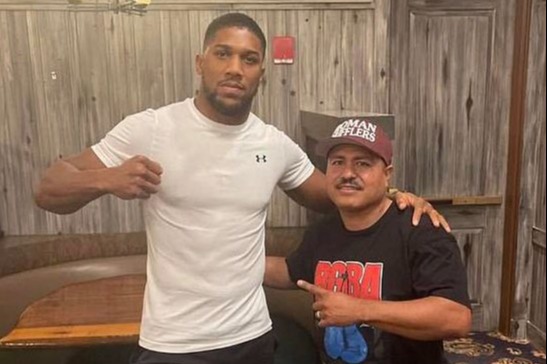 Anthony Joshua has confirmed he will be trained by Robert Garcia for his rematch with Oleksandr Usyk.

AJ will have Garcia by his side for this encounter, the first time in his career that Rob McCracken will not be the head trainer for a Joshua camp or fight.

Angel Fernandez has also been promoted to a higher standing within AJ’s coaching team, so why has the 32 year old put Garcia in charge?

“The main thing is a happy fighter is a dangerous fighter, I’m in a good place. Garcia’s actually here now, we are just working on a few things. It’s not about changing style as such. Garcia’s style might be crouch down, bob and weave but I’m a six-foot-six heavyweight,” Joshua told iFL TV.

​​”It’s not about changing style, it’s about his experience and what he knows at championship level. Adding that to the camp is priceless in my opinion, but I’m in a good place.”

Many fans and experts were shocked that Joshua tried to outbox Usyk last September when he was soundly beaten on points, thus losing his IBF, IBO, WBO and WBA (super) heavyweight titles.

AJ won’t make those mistakes again, but it seems Garcia, who has led 14 different world champions, is being used for his mentality and gameplans.

It’s now been announced that the fight will go down at the Jeddah Super Dome, but the date is still yet to be confirmed. July 23 has been the working date for a while, but Eddie Hearn says it could be a couple of weeks later than that.

born in the usa


Wilder says comeback is because boxing ‘dies without an American champion’

Joshua said of the delay: “As annoying as it is, since championship level my fight career has slowed down but it is what it is. They are big fights.

“As much as I’d love to get in there tomorrow but I can’t. Until I’m at the official press conference and I can say ‘this is the official date’, I think it’s subject to change again.

“As you know Eddie said I’m going to announce it in three weeks, then another three weeks. That’s how it goes. He’s hard at work trying to secure a date, but I’m sure it’s round the corner hence why I stay in the gym. Once it’s announced I’ll be ready to crack on.”

It will be nearly a year since the pair first fought at the Tottenham Hotspur Stadium when they finally do meet and Hearn believes Tyson Fury is keeping ahold of his WBC heavyweight title so he can face the winner for the undisputed heavyweight title.

Hearn has speculated that could happen in December, all going well.