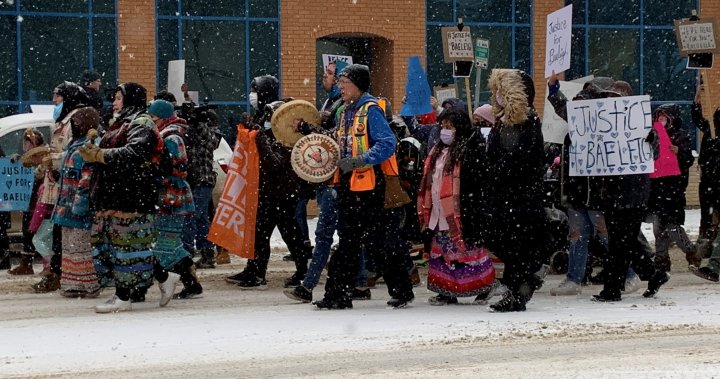 It has been 126 days since nine-year-old Baeleigh Emily Maurice lost her life in Saskatoon, Sask.

The young girl was hit by a truck last September when she was crossing 33rd Street on her scooter at a marked crosswalk.

Girl on scooter dead after crash involving truck in Saskatoon

To date, there have been no charges laid against the driver involved.

On Thursday, family, friends and supporters rallied in front of the Saskatoon Police Service headquarters before walking to City Hall.

1:45
Vigil held for 9-year-old girl who died after a collision with a truck

After months of trying to get answers from the Saskatoon Police Service, Smokeyday said they wanted to take action.

“There was no line of communication open with Rochelle from people in positions of power,” said Smokeyday.

A video was posted to social media earlier this month showing the exact moment the incident happened.

“Since the video has been released, there has been an outpouring of support and those lines of communication are now open,” said Smokeyday.

In a release earlier this week, Saskatoon Police Service said they are aware of the video and confirmed the investigation remains active.

They added, collisions, especially fatal ones are ‘complex’ and take time to solve.

But the family says it is taking too long.

“Rochelle’s hurt. I wouldn’t want to use that she’s angry or she’s upset. She’s just, she wants to grieve and you can’t grieve without any answers,” said Smokeyday.