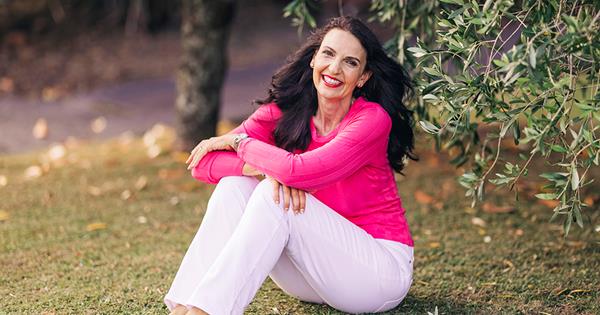 But the Port Waikto flight attendant doesn’t suffer from memory loss – she has a rare condition called prosopagnosia, also known as face blindness, which means she can’t identify faces. Not even those of her husband or children.

“When my husband Gary and I go out together, I need to memorise what he’s wearing so I can find him if we become separated,” she confesses. “If there’s more than one man wearing the same-coloured polo shirt, I’ll look at their shoes – my husband always has nice shoes on, not trainers.”

But it’s not a fail-safe method. Many years ago, Lulu was genuinely scared that there was an intruder in her house, only to discover it was her then-partner, who had simply shaved off his moustache!

Yet she didn’t think to seek a diagnosis, even when people accused her of being aloof or rude for not recognising them. Had Lulu been older, she may have worried it was early-onset dementia, but she simply didn’t realise she was different until 12 years ago, when she was nearing 40.

“I was channel-hopping and happened across this documentary that showed a man saying he hated standing at the airport waiting to pick up his wife because he could never pick her out,” recalls Lulu.

“I spent the next 30 minutes with my jaw open, thinking, ‘That’s me! I do that!’ I’d just assumed everybody memorised outfits or physical features to know who people were. It never occurred to me that something was wrong as I was in the top 10% at school.”

Armed with the name of the condition, Lulu did an online test that proved she did indeed have face blindness. “And bam!” she laughs. “Finally, I had all the answers. I wasn’t just a self-centred, snobby, unobservant bitch – I had a condition!”

The mother-of-two had learned to keep a mental library of facial features and mannerisms to help her determine who people were, but she was constantly reintroducing herself to others and covering up mistaken identities.

“I’m just so good at bluffing and exceptionally good at recognising people by their voices that I’ve been able to hide most of it,” she grins. “But I’ve got to the point where I want people to know so they’re not offended and don’t think I’m rude.

“Sadly, there’s no treatment for it. It’s caused me a fair bit of angst. Most people don’t understand it, especially when I can sometimes recognise an unusually large nose, super-plucked eyebrows or a big mole on their left cheek.”

In her work as a flight attendant, Lulu memorises seat numbers to help serve passengers, but it’s not uncommon for her to look after a passenger for an entire flight and then not recognise them at the baggage carousel.

“When my children were little, I’d have to memorise what they were wearing before I dropped them at kindergarten. I’d do a lot of sewing so there was no chance to mistake them, but if kindy had given them a different shirt or dress to wear, I couldn’t tell which child was mine – I’d just stand there and wait until they ran up to me.”

Her son Alex and his wife Steffie are expecting identical twin boys next month, and Lulu hopes her ability to decipher facial nuances will help her tell them apart. But even everyday things such as watching TV shows leave her totally confused.

“There was a rule when the children were little that I was only allowed to rewind three times in the movie because I’d never know who the characters were,” recalls Lulu, adding that she has since remarried and her ever-patient husband now pauses programmes every 10 minutes to ask, “What do you need to know?”

Lulu has joined an international Facebook group for people with face blindness and finds comfort in the fact that other members have to look out for someone’s feet or a tilt of their head to recognise a loved one.

“I feel like I’ve found my tribe and I’ve realised I’m lucky as my situation seems to be mild to moderate. Some people are reclusive and introverted because it affects them so badly – some don’t even recognise themselves in the mirror.”

Lulu only recently told her boss and colleagues because she wanted to share her story to raise awareness of the rare condition. She says, “The only other New Zealander I’ve seen on the Facebook page is in Palmerston North, but if there’s another person out there who can’t recognise their own child on the soccer field, I want to help them know they’re not alone.”