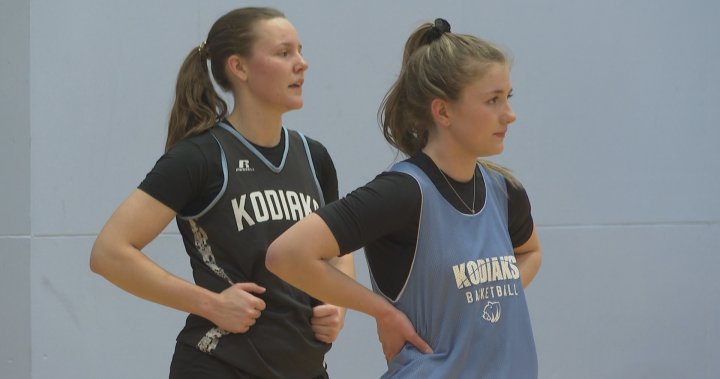 This season marks a passing of the torch of sorts for the Lethbridge College Kodiaks women’s basketball team.

Kirsten Barwegen is the grizzled veteran of the team — one of just two fourth-year players on the roster — showing the young guns the ropes in the Alberta Colleges Athletic Conference (ACAC).

Lethbridge’s year in sports: Pandemic impacts felt as competition returned to ‘normal’ in 2021

“We have eight rookies, and they didn’t have a Grade 12 year, so we’re really looking at Grade 11 experience,” said Kodiaks head coach Ken McMurray.

“So for Kirsten to be there — to be that leader, to talk them through things — has been excellent.”

For Barwegen, this season has been about embracing that leadership role.

“Honestly, I’ve forgotten that they’re first years,” she laughed. “They’re not playing like that, and I definitely hold them to a level of like, ‘I don’t care that you missed your Grade 12 year.’”

The Kodiaks went 5-1 during the first semester of their season, rattling off four-straight wins heading into the winter break.

Barwegen has been an undeniable factor for the Kodiaks through six games, averaging more than 17 points-per-game and 10 rebounds — both good for top five in the conference — but she’s the first to point to the team’s scoring leader: her younger cousin Courtney Deemter.

Our girls shake off a slow start and comeback to bite the @MHC_Rattlers 76-65!

Courtney Deemter pours in 32 PTS to earn our player of the game honours ⭐️ pic.twitter.com/cTuwZtEuaM

“I’m probably harder on her than anybody else, because she’s so talented and also because she’s my family,” Barwegen said about her rookie cousin. “I don’t let her slip whatsoever, because I want the very best from her.”

“When she said that I was a little bit surprised, because I think she’s pretty hard on everyone, but I can see that she pushes me a little bit harder just because she knows that I’m not going to be offended,” Deemter said with a laugh.

“We’ve got that love, you know, so it’s all good — but I really appreciated it and I can take that well, especially from her.”

Deemter and Barwegen are two of just five ACAC players to post more than 100 points so far this season, with the rookie’s 117 points and 19.5 points-per-game both good for second in the conference thus far.

Deemter says the initial jump into ACAC basketball was steep, but the chemistry and trust among the Kodiaks quickly made her feel comfortable.

“I came the first day of school and I didn’t know what to expect at all,” she said.

Barwegen says while she had high expectations for her cousin, she could have never predicted how she would burst into the ACAC.

“I’m super proud. I mean, I look at her, and I’ve never put up numbers like that, and for her to do it in her first year (is incredible),” she said.

As the team prepares to return to game action this weekend, Barwegen says she spent plenty of time over the holiday break reflecting on her career with the Kodiaks, and thinking about this final semester.

“This being my last year, I want it to be the most memorable,” she said. “And it already has been. It’s been the best year that I’ve played.”

The Kodiaks will begin their second-half schedule against the top team in the conference, the undefeated SAIT Trojans, at Lethbridge College on Saturday night