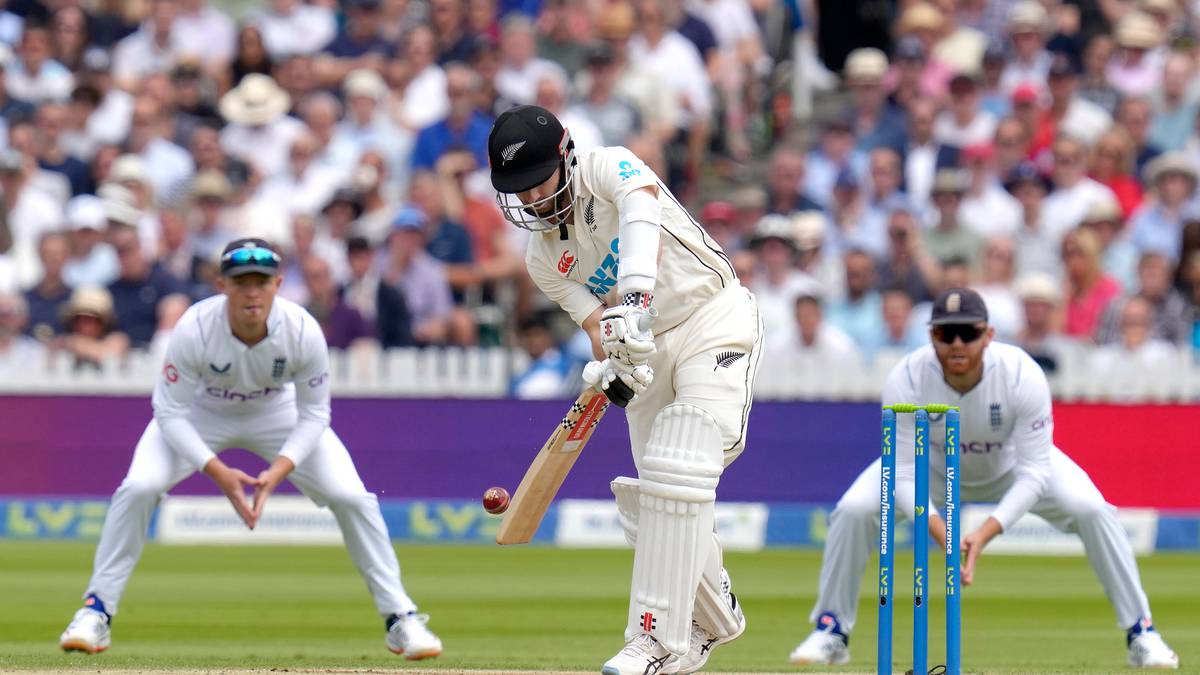 Kane Williamson plays a shot off the bowling of England’s James Anderson during the second day of the test match between England and New Zealand at Lord’s cricket ground in London. Photo / AP

All the action from day two of the first test between the Black Caps and England.

By Andrew Alderson at Lord’s

New Zealand are struggling to take charge of the first cricket test against England after an extraordinary recovery at Lord’s.

They have advanced to 38 for three in their second innings at lunch on the second day, a lead of 29, with Will Young dismissed for one, Kane Williamson 15 and Tom Latham 14.

Devon Conway is not out six and Daryl Mitchell is unbeaten on two.

Lessons regarding tentativeness and intent from the first innings have had difficulty resonating.

Young was lured forward into an edge by James Anderson, who got the delivery to seam up the slope. Wicketkeeper Ben Foakes launched himself forward to complete the catch as the trajectory faded.

Debutant Matthew Potts removed Williamson for a second time in the match,
caught by Jonny Bairstow at third slip. The Black Caps captain had worked diligently to see off shine, but was tempted into punching a customary back foot drive through mid-off. The bounce from the short-of-a-length ball saw him play early and away from his body.

Latham also nicked off to Potts in a corridor outside off stump, but appeared confused whether the back-of-a-length delivery had taken the edge. The decision review system allayed any doubt.

Earlier, the visitors dismissed the hosts for 141 in 42.5 overs after England had resumed on 116 for seven.

The world champions demonstrated their capacity to endure and respond to adversity after England’s dominance at 59 without loss.

Tim Southee and Trent Boult needed 6.5 overs to wrap up the tail.

Southee finished with figures of four for 55 and Boult took three for 21.

Debutant spinner Matt Parkinson, who only came into the match courtesy of Jack Leach’s concussion trying to save a first innings boundary, made eight.

James Anderson was left seven not out.