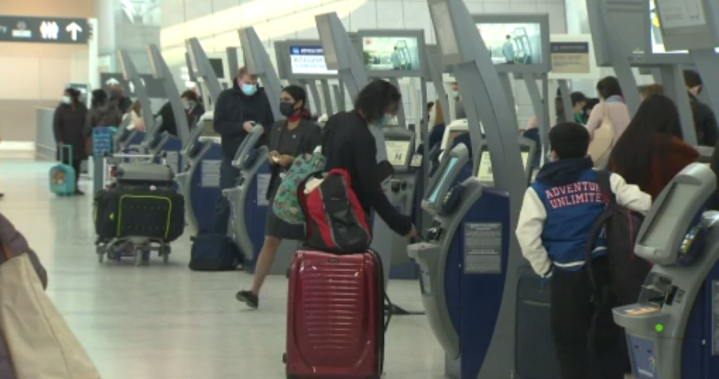 TORONTO — The authority that operates the Toronto Pearson International Airport says things are running smoothly on what is expected to be its busiest travel day since the start of the COVID-19 pandemic.

Tori Gass, a spokeswoman for the Greater Toronto Airports Authority, says it was a busy morning at Pearson as travellers look to get away for March Break, but despite the lineups for departure flights, things were running “really quickly.”

Gass says by the end of the day, about 85,000 people are expected to arrive or depart at the airport.

That’s the most travellers the airport has seen in a single day since the start of the pandemic.

By comparison, Gass says the airport saw 145,000 travellers at the airport on the Friday that marked the start of March Break in 2019.

The Greater Toronto Airports Authority is reminding travellers that passengers may experience longer wait times during check-in, security and boarding their aircraft due to additional screening questions and health checks in place.

Passengers are being advised to arrive at the airport at least 90 minutes before domestic flights and at least three hours before international flights.

Gass says Pearson is expected to continue to be busy over the next few days, which she called a “positive sign in the right direction” and shows that people are “eager” to travel again.

3:01
Friday expected to be busiest day of travel at Pearson airport since COVID-19 pandemic began