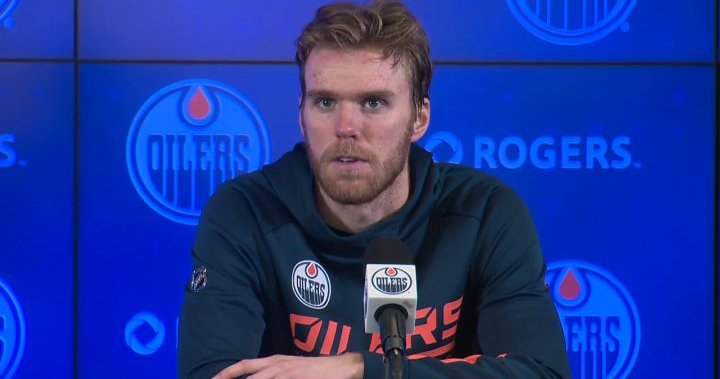 As the COVID-19 virus winds its way through the Edmonton Oilers‘ lineup and the pandemic prompts the postponement of a number of the team’s home games, it was speculation about a potential high-profile addition to the roster and not the coronavirus’ impact on the hockey club that captain Connor McDavid was asked about most at a media availability on Wednesday.

“Right now it’s all speculation,” the co-leader of the NHL‘s regular season points-scoring race said when asked about the possibility of the team signing Evander Kane, a player known for his goal-scoring ability and grit as much as for recent criticism over his conduct off the ice.

“Truthfully, I don’t think that’s a bridge we need to cross until something is more official,” he said when asked whether fans should be concerned about how the Oilers’ locker-room and public image could be affected by signing Kane.

Ever since the San Jose Sharks took steps to try to terminate Kane’s contract this weekend, alleging he once again violated COVID-19 protocols, speculation has been rampant about what team the rugged but skilled winger might sign with, or if he signs with another NHL team at all.

When asked about Kane on Tuesday, Oilers general manager Ken Holland confirmed he has had discussions with Kane’s agent, saying, “as a manager, it’s my responsibility to investigate every situation.”

While Holland did not express how much interest the Oilers have in Kane or what his level of interest in coming to Alberta may be, he said he believes in second chances for people if they take steps to learn from their mistakes and make changes.

“Obviously Evander’s an amazing player and he’s had lots of success over the last couple of years, and whatever else has been going on is not really something that I look into much,” McDavid said Wednesday. “Obviously there’s lots of talk going around. I’ve talked to Kenny.

“If fans don’t like it, the media doesn’t like it or whatever… I think it is what it is… The public opinion is something that obviously matters a lot, but we’re here to try and win games and try to put together a good team on the ice and if Kenny thinks that that’s what he can do, then that’s what he can do. I think he’s got our full support in what he does.”

READ MORE: Evander Kane calls out NHL for inaction on racism, says games should be postponed

Over his NHL career, Kane has scored 264 goals and 506 points in 769 regular-season games. His sudden change of status as a now free agent comes as the Oilers seek to find their footing again in the second half of the season. The team started the year as one of the best in the NHL but have gone 2-9-2 since Dec. 1.

The Sharks’ move to terminate Kane’s contract, something the NHL Players’ Association has said it plans to challenge by filing a grievance, came after the team alleged the 30-year-old violated COVID-19 protocols while a member of the club’s farm team in the American Hockey League.

Kane was playing in the AHL ever since he served a 21-game suspension for a violation involving a fake COVID-19 vaccination card. In recent months Kane has faced allegations of sexual and physical abuse levelled at him by his estranged wife, who also accused him of betting on hockey games he was playing in.

An NHL investigation found no evidence to support the allegations. Kane has denied the allegations made by his estranged wife and apologized for using a fake vaccine card.

“It’s a situation that I don’t think we need to really talk about until something’s a bit more official,” McDavid said when asked about the potential impact bringing in Kane could have.

McDavid noted that Kane is “a great player and can help us a lot on the ice.”


Oilers head coach Dave Tippett said while he is aware of discussions between Holland and Kane’s agent, he would rather not discuss the potential addition unless it actually happens.

“I think both sides are still doing their due diligence,” Tippett said. “(Holland) mentioned it to me yesterday that they’re looking at it.

“I haven’t seen him play this year. I’ve watched him play in the past. He’s been a good player. But until everybody does their due diligence, it’s a moot point for me.”

When asked about how Kane may impact the team given the controversies that have surfaced during his career, Tippett said it’s too early to look at that.

“If he ends up in Edmonton, then you can ask me all those questions.”

The Oilers hit the ice on Wednesday for the team’s first practice since Saturday. With several home games being postponed because of health restrictions limiting attendance capacity at Rogers Place, McDavid said each practice is becoming increasingly important as the team faces long gaps between actual games.

“I though the practice was good,” the 24-year-old said. “It’s something that’s necessary when we’re only going to play one game in 15 days so… These practices are big for us.

“We’ve got to go hard at each other — as close to game-like as you can — and get ourselves prepared.”

McDavid added while the unplanned slowdown in the team’s schedule is frustrating, it’s something many other NHL teams have faced because of COVID-19 this season.

“It’s pretty crazy times right now in Canada,” he said. “It’s frustrating, but we follow the rules and play the games when they tell us to play.”

“Guys want to get up and get going,” Tippett said, adding it’s been a challenge navigating the revolving door of Oilers players being placed into and then emerging from COVID-19 protocols. “You’re just trying to piece things together the best you can to get to Saturday.

Tippett noted that “surprisingly, spirits have been really good” despite the pandemic’s fifth wave impacting the team and its players.

“I was just a little achy and then just a stuffy nose. Nothing too crazy. I feel good now,” he said Wednesday. “I’m obviously not looking to get COVID(-19), but it’s almost like a mental break when you come out of the protocol because you don’t have to test anymore.

“It’s exhausting kind of of sitting and waiting for your test result… You’re trying to get ready for the game but you don’t know if you’re going to play.

“It’s been crazy times and I think our doctors and the medical team have done such a good job of handling it, and it’s stressful for them more than anybody. They’ve done an amazing job and we’re just trying to get through this.”

The Oilers will play against the Ottawa Senators on Saturday. Tippett said a number of Oilers still in COVID-19 protocols may be able to rejoin the team before then depending on how testing goes.

He said he believes the team will be able to turn things around and get its season on track once more games start to be played.

“I think we’re going to get this going the right way and we’ll be a better team for it,” he said of the Oilers’ struggles in recent weeks. “But it’s a challenge.. just finding that win.

“Ultimately I think this is adversity that is pushing our game to be better.”

Tippett noted that early in the season, the team’s power play was “really driving us.”

“We were outscoring a lot of our mistakes,” he said. “It’s funny how it goes because there’s good chunks of our 5-on-5 game that I think are better than they were at the start of the year, but our special teams have dropped off a little bit and we can’t find that extra goal we need, and that’s what it’s about.

630 CHED will broadcast the Oilers game against the Senators on Saturday night, starting with The Faceoff Show at 6:30 p.m. The puck drops at 8 p.m.

–With files from Joshua Clipperton, The Canadian Press